I took a brief break to watch the #SFGiants celebrate the World Series Championship - a great day in San Francisco. A bit of cheer (from about 1 million crazed fans). 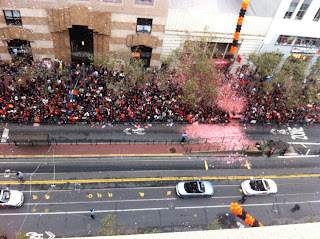 (The view from nine floors above Market Street, confetti guns and players in cars. I'm going to miss that office space...especially if Giants keep winning)

Here's my 7th post on technology, communities and disaster response.