The Money For Good II report is out today!

A deeper look at what motivates donors to give, what information they use, what needs to be done to research to make it more useful to donors, and what could be possible if a small percentage of donors focused their giving on highly effective nonprofits.

Get all the materials here.

I like the Case Foundation's #goodspotting campaign so much I wanted to declare it a buzzword the minute I heard it. That seemed perhaps a bit rash. Instead, I decided to highlight some fun fundraising campaigns and ask you to submit your favorites.*

Jimmy Wales is back asking for money on Wikipedia. This campaign raised eyebrows, and a lot of money, last year.

The @rockpapergivers campaign is well-named. Not much info available, just a twitter handle with a great description, "The worlds largest rock paper scissors tournament for charity, raising $1mn in 2012 with roshambreneurs."  Intriguing. Could rank up there with last year's stellar Spelling Bee for Cheaters hosted by 826 Valencia.**

The #Whatever campaign. Do something, anything, #dowhateverittakes to help homeless kids.

Thanks to @emahlee for the link to the "save our journalists" campaign from Grist - journalists as endangered species who need organic tea - here's the video.

It's not too surprising that the country that gave the world Monty Python could also consistently make Red Nose day funny. (HT @carolefiennes)

Please send me links to the holiday giving campaigns that catch your eye for their irreverence, accuracy, engagement, irony, or humor. The ones that excel in shtick, make you laugh, and make you violate your own rule about not passing on chain emails. Submit them in the comments only and include videos and other links so we can all enjoy. The Chronicle of Philanthropy recently ran this story on shocking fundraising campaigns - I'm looking less for shock and more for shlock.

While you're at it,  give me thumbs up or down on #goodspotting as a 2011 buzzword. (Vote in the comments or tweet me @p2173). Catchy? Meaningful? Might it stick around as an idea (or, in 21st-century-online-jargon) become a meme?

Happy Turkey. Go on out and appreciate something today.

* I also set up a new blog, (app)reciators, for the little things in life
**Full disclosure - Eric Kessler, my colleague at Arabella Advisors, is behind @rockpapergivers.

Michael Porter, the Harvard business school guru, defined how industries work in his book on competitive strategy. He drew out the relationships between competitive enterprises and their supply chains, infrastructure, distribution channels, and advocacy organizations. He noted how industries develop secondary support firms - such as specialized consulting services geared toward the needs of the enterprises in that industry.

Blue Avocado, an online newsletter targeting nonprofit professionals, recently ran this piece on the "philanthropic industrial consulting complex." The title gives you a sense of the piece's position on the growth in consulting firms serving nonprofits and foundations. One insight worth considering is the degree to which young professionals may be more attracted to the consulting firms than to the nonprofits themselves. If true, this detracts talent from the sector and devalues the role of direct experience over academic degrees. The article offers no data to back the claim, but it is an intriguing concern. The third piece was a Washington Post story on the use of funds at the Newark Public Schools foundation funded by Mark Zuckerberg and others. At the time, the Newark Star Ledger was reporting that 1/3 of the funds from the Foundation for Newark's Future had gone to consultants linked to the Mayor's office.

As the founder of a consulting firm that served foundations, and now a managing director at another such firm, I've lived through the decade and a half of consulting firm growth. I founded my firm in 1997 in my living room. Within a few years we were competing with the spin offs from the big consulting firms or consulting firms with ties to major universities. To the degree that these firms add rigor, analytic capacity, talent, and research to the world of social good they are probably a net positive. Those that run as commercial firms inhabit the social enterprise space - serving the social sector without tax subsidy and paying for it with earned revenue. Those that run as nonprofits work hard to justify that tax exemption by sharing otherwise proprietary insights with the broader sector. However, to the degree that competition between these firms results in the service sector equivalent of planned obsolescence, or the kind of tail fin embellishment of 1950s auto makers, we might take a second look at our utility.

The consulting world has considered professional credentials, social impact advisors' networks, professional alliances, and so on. These efforts are nascent and no better or worse than any other industry's unforced efforts at self-regulation. As consultants to the social sector, I believe it behooves us to take seriously the potential and limitations of our aggregated selves.
Posted by Lucy Bernholz 3 comments:

Thanks to Fast Company's Co.Exist blog and Nathaniel James for calling attention to the progress being made in "open philanthropy." It is an unduly generous profile of me but the real news is the exciting progress being made on sharing data about private resources for public good and treating these data as public goods. Other elements of what is changing that are not mentioned in the Fast Co article:


What's most exciting? That the list above could go on and on...
Posted by Lucy Bernholz No comments:

The international program, Ambassadors for Philanthropy, aims to encourage philanthropy by giving philanthropists a voice. This involves all kinds of media use, a broad definition of philanthropist, and a global presence. They are in start up phase, making connections and listening to doers and donors from Bucharest to Beijing.

The program was started by Dame Stephanie Shirley, who was appointed Britain's first ever Ambassador for Philanthropy in 2009, and aims to engage philanthropists in countries all over the world. They are starting the conversation, literally, on November 7 with their first Mashup Monday - conversations via social media. Join them.
Posted by Lucy Bernholz No comments: 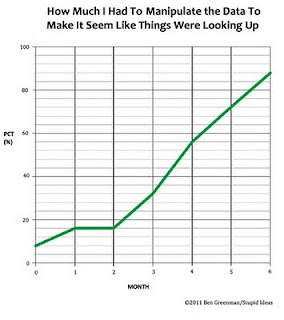 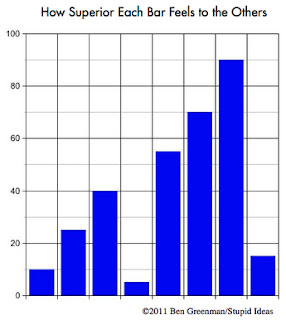 (Both charts from Ben Greenman Graphs about Charts and Charts about Graphs, Graph One and Four.)


I found these in the Fall 2011 issue of the Grantmakers in the Arts Reader*. As is the way with pictures and words, they absolutely convinced me that Infographics had to be this year's philanthropy buzzword #5.

We've gone from the Beauty of data to Bad data, Badly drawn. Of course, a picture could show this best, so here it is: 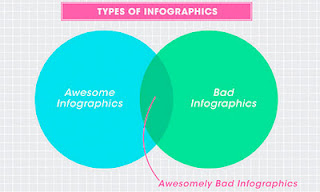 (From The Guardian, Datablog)

The good news is this kind of overkill fits in perfectly with the lifecycle of these things. We've gone from rare to cool to overhyped and overused. Next in line should be "good and useful and common."

*By the way, the issue also has a fabulous short spread (graphic novel style) on copyright in the digital age. Absolutely worth reading.
Posted by Lucy Bernholz No comments:

I love data. Especially when they are all over the place. This is the case with estimates of the impact of the charitable tax reforms, proposed in President Obama's (Congress-will-hold-it-hostage-forever-so-it-doesn't-really-matter) Jobs for America Act.

The Joint Committee on Taxation estimates that $230 billion in government revenue will be "lost" to charitable donations between 2010 and 2014. So the $230 billion question on the table to several economists is what would be the effect on charitable giving if the law:
The experts said:

So, changing the law will decrease giving by somewhere between $.8 billion and $5.6 billion - that's quite a range. The scope of that range gives you a sense of how much the economists disagree on the likely effects.  Even the high number estimate is only about 2% of annual giving.

So, what might REALLY disrupt things as we know them?
I can think of all kinds of other possibilities. Some of them might be rule changes, perhaps around telecommunications and how we use mobile phones. Others would be behavioral, new practices for sharing digital information that empower networks more than organizations. Others are only slightly farfetched - involving legal challenges around the rights of robots or with regard to human tissue. Perhaps we'll see a space-based (ocean-based) community where all the roles and rules are written from scratch.
What do you see as potential disruptors - for good or bad - regarding philanthropy as it now works in the U.S.?

The third edition of my annual industry forecast will be available for purchase on December 1st. Stay tuned for ordering details and some special offers this year. Subscribers to Stanford Social Innovation Review should look for the ad in the upcoming issue for a discount code. 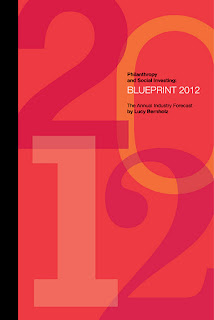