A few days ago I posted about #DetroitWater. I had sent off an email to the creators before posting, and when I didn't hear back in a day I went ahead and posted the blog with the questions.

I think my emails got buried in the flood of attention they've been receiving. A little Twitter outreach, and the blog post itself, and they circled back to me ASAP with these answers to my earlier questions. To save you from having to click around - here's my old post again and my questions - this time with their answers.

Here's a website that allows anyone to pay the water bill (or part of the bill) owed by someone in Detroit. Lest we grow complacent, allow me to point out several noteworthy - dare I say, almost astonishing - things about this from the perspective of (what else) digital civil society:

I tried to get some more information about #DetroitWater but haven't heard back from the folks that I emailed. Here's what I asked them (My questions in bold, their answers follow)


My original Questions with their Answers

1. ​You mention in the privacy section that Detroit Water might identify residents. How likely is this, how would it happen, has it happened?

Tiffani and I have gone through the payment process several times and have not had names revealed. The information presented on the DWSD's site is not under our control. We collect names as a part of the submission process to get assistance and have each resident indicate whether we can give their names to the donor or not. As of yet we haven't released any names. and information collected and stored by us will not be released without the permission of the resident or the donor.

​2. ​What kind of permission did you need to get from Detroit Water Auth to use this info? How did you get the info?

We did not get permission from the Detroit Water and Sewage Department. The website has several channels for entry and one of those is simply an account number.

Residents are providing us with their account numbers, phone numbers, address and amount owed, which is what we need to verify that they are actually in need of assistance. We then pass along the account number to the donor who makes a payment directly to the DWSD on the resident's behalf.

​3. ​Are residents opting in or opting out of this? Who is deciding and how are they deciding who's bills get paid?

Tiffani, myself and a team of volunteers have been manually matching donors to accounts. As we iterate and demand grows, we are adding in rigor for determining who is prioritized for help. For example, we now have a check box for people who are over 65.  Other guidelines include, must have a past due balance, must be residential and not commercial, account must have activity in terms of use. At this point we have enough donors that we aren't having to deny one account over the other, just that it meets our standards for assistance. This is subject to change.

​4. ​ Where is transaction data being stored? How secure is it?

The transactions take place on the DWSD website. So the level of security is that as expected for a site that processes payments. We do not collect payments or payment information.

​5. ​Is CFA involved in this (one of the founders has a CFA email address)? Did you create this totally on your own? Others who helped? How long did it take?
This is not a Code for America project.

The idea and iterations of the site and our processes were created by Tiffani and I. It took us a weekend to get it up and running. We are constantly iterating as needed, and on the brink of having everything automated via algorithms written by Tiffani.

We've had help with operations from a team of volunteers who are listed on our site here: http://detroitwaterproject.org/#team

Here's a website that allows anyone to pay the water bill (or part of the bill) owed by someone in Detroit. Lest we grow complacent, allow me to point out several noteworthy - dare I say, almost astonishing - things about this from the perspective of (what else) digital civil society:
I tried to get some more information about #DetroitWater but haven't heard back from the folks that I emailed. Here's what I asked them:

Thanks for feedback on yesterday's attempt at visual representation of digital civil society. Here's an updated graphic thanks to your input. 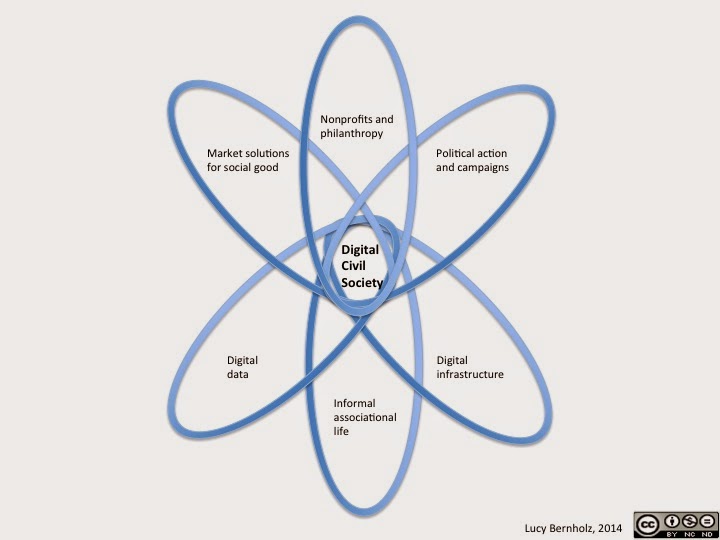 (And to those who wanted it to be a spinning, multi-colored GIF, I say - go for it! Make it happen, make it better! As you can tell from above I can barely align objects correctly. I will gratefully receive any and all improvements on the above and give artistic and graphic credit whereever it may be due. Thanks)

I spend a lot of time trying to explain what I mean by digital civil society.
Does this help? 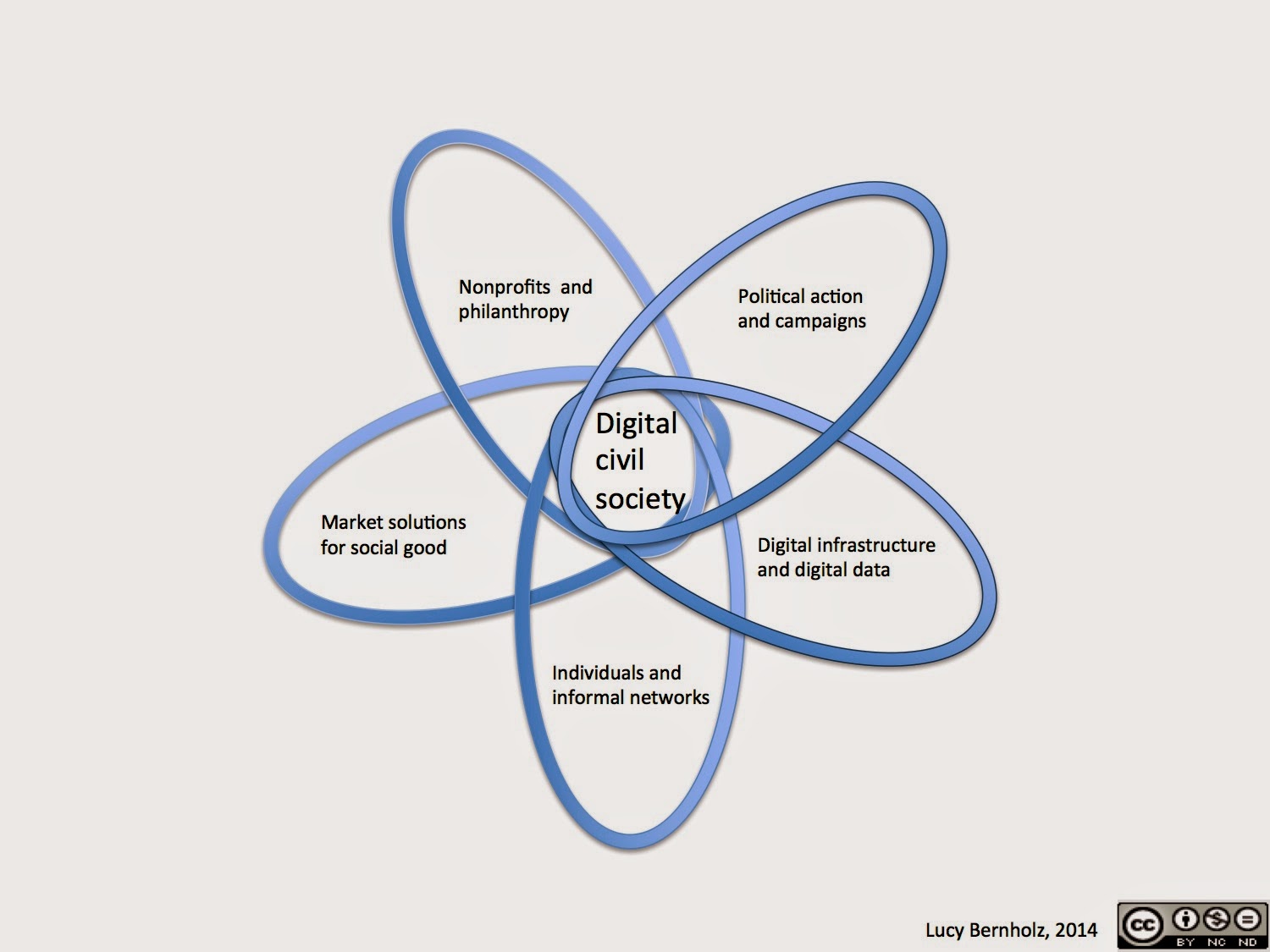 What are nonprofits for?

What are nonprofits for?

This seems like a question that used to have an easy answer - they are tax-exempt organizations that provide services, from education to art to meals; they offer a place for ideological, ethnic or other minority groups to express their ideas and serve their communities; they offer complements or alternatives to services provided by the government; and they advocate for change.

While it never really was all that clear cut I think there was a general sense among Americans at least that, within the U.S., you knew a nonprofit when you saw one.

Well, if it was clear once, it's not clear now. And there are challenges to the notion of "nonprofits do X" coming from many directions. Here are a few headlines that show this:

In both cases above the challenge comes because of who the organizations serve - in the YMCA case the membership is very similar to those folks who join commercial gyms, so why does one get tax privileges over the other. The argument raised in the case against free software is that such a resource might be used by commercial enterprises - so where's the public benefit?

The nature of these challenges focuses on who might be benefitting from the services, not whether the services themselves are a public benefit. This is ironic from a nonprofit standpoint. For decades nonprofit managers and funders have been trying to build sustainable revenue sources for nonprofit organizations so they can survive. So much so, the Red Cross recently argued that its spending practices are trade secrets! BUT, at least in the logic of the two headlines above, if the organizations might serve those who can pay (one source of sustaining revenue) then they may not be nonprofit.

As if the market-based challenges to nonprofits weren't confusing enough, in the U.S.A. there's the growing challenge of political action within the nonprofit frame. I'm in the middle of reading Ken Vogel's Big Money about campaign finance post-Citizens United. He has evidence aplenty of the deliberate weaving of 501c4s (nonprofits which provide donor anonymity) into the mix of enterprise networks being built to raise independent cash for campaign politics. And then, along comes this study, showing us what we all suspected, the IRS can't (and possibly shouldn't be) regulate these organizations - "Hobbled IRS can't stem dark money flow," Center for Public Integrity, July 15, 2014.

Of course, given recent rulings on corporate rights as religious enterprises (pdf), the movement to build socially responsible businesses,  and the shenanigans of big companies "inverting" to save taxes, it's no longer really clear what a company is either.

Clearly there's lots of change afoot in the corporate code and practices - from the commercial space, political realm, and within the independent sector.  If it's getting so hard to distinguish these enterprises, shouldn't we be asking "What about the distinction matters?" That way we can focus our attention (and regulation, oversight and incentives) on the real reasons we have separate sectors of commerce, government and civil society - not the special interests that have grown up around and within each of them.
Posted by Lucy Bernholz 3 comments:

I'm running faster than I can (I broke my foot and am in a boot, so actually I can't run very fast right now). I just realized with all the writing I've been doing, I haven't been blogging. So - a few quick thoughts: 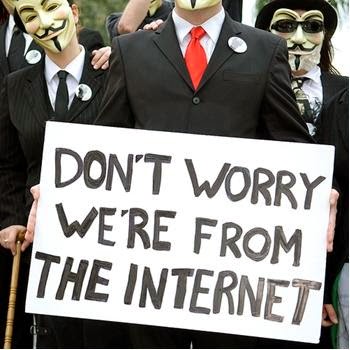 
1. betterplace lab
I got to spend some time with the team from betterplace lab and learn from their Lab Around the World. They've got great examples of digital social innovation from several countries. I'm thrilled that some of this material will be featured in Blueprint 2015. Look for the United States launch of their work at the Digital Civil Society Lab's Ethics of Data conference in September.

2. Digital social
In Blueprint 2014 when I wrote about digital social I had to clarify that the social refers to "social good" not "social networking." The term "digital social" seems to have caught on in Europe more than in the United States:
3. Nominet Trust NT100 - social tech guide
I've been invited to join the steering committee for the Nominet Trust's NT100 - which will be an incredible opportunity to learn of more digital social innovation. Check out their Social Tech Guide.

5. There's digital activism here in the U.S. also.  My favorite new story is this article by Nancy Scola on how "rogue archivist" Carl Malamud is reaching out to Republican Congressman Darrell Issa and White House CTO Todd Park to offer technology solutions to protect privacy and release 990 date from the IRS.
Posted by Lucy Bernholz No comments: