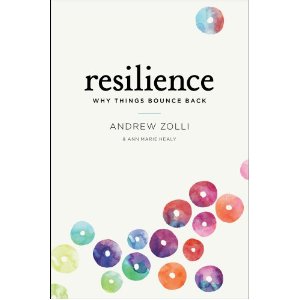 
Resilience telegraphed itself as a buzzword back in 2011. I waited until July to post it, to see if it had any legs. Back in December and January, here's what folks were saying:

From Triple Pundit: "Resilience is a word that captures much of what has occurred over this past year: the Arab Spring; the anger that has boiled over into first the Tea Party and then the Occupy movements; strapped municipal budgets; and coping with an onslaught of natural and man-made disasters around the world. Whether we are talking about economic resilience, political resilience or social resilience, the R word captures what many at the grassroots are facing at a volatile time."

The New America Foundation was taking bets on whether the word "resilient/resilience" would be heard in the Presidential debates  - and on January 3rd it was even the winning question in the extra credit category with 65% of the votes cast.

On Detroit and the American Dream a discussion of resilient communities

Now it's really real. First, Andrew Zolli has a good book out on it called Resilience: Why Things Bounce Back, giving it real meaning and application (read it). Second, the political semantics that seemed to make resilient more palatable to climate-change bashers who can no longer stand the word "sustainable" has given the phrase steam from the political left and right. Just as "the wisdom of the crowds" grew in buzz the more it became separated from Surowiecki's careful analysis of it, so too will resilience. Third, here's an innovation website claiming resilience as the latest "innovation buzzword."

What will it mean for philanthropy? Start listening for talk of resilient organizations rather than sustainability strategies. Resilient leaders (and leadership) will be next. Yes, it's a buzzword. But with all the change taking place, and the uncertainty that comes with it, focusing on adaptability and bouncing back seems like a good idea. The word might become buzz, but the idea and capacity are the keys to evolution and survival.

The Citizens United decision plus the Presidential election plus Super PACS and anonymous giving through 501(c) 4s suddenly has a lot of people itching to get the public to distinguish between subsections of the IRS tax code.  This strikes me as about as likely as getting people to stop saying "I'll Google it" when what they mean is "I'll go type a search term into the browser and see what I find."

Time and again folks will point out the 501 (c) 4 tax exempt organizations are "social welfare organizations," distinct from 501 (c) 3 tax-exempt organizations which are "Religious, Educational, Charitable, Scientific, Literary, Testing for Public Safety, to Foster National or International Amateur Sports Competition, or Prevention of Cruelty to Children or Animals Organizations." In other words, nonprofits.

Addressing the problem as a semantic issue or trying to introduce a term like social welfare organization into the vernacular is a losing strategy in my opinion. First, it won't work. Second, it doesn't solve the problem of what these organizations are actually doing. And, third, it won't have any effect on money in politics. But all that is besides the point of this buzzword blogpost. Social Welfare Organization may be the first ever entry on this list of "an existing term for which the failing effort to make it a buzzword is precisely why I picked it."

Lisa Philp suggested Sensemaking as a buzzword back in December 2011. I've been on the lookout and she's right - it's everywhere.

A list of blog posts on collaboration and sensemaking from the Hybrid Vigor Institute.

As a tagline for a consulting firm working with Markets for Good.

As part of the study title in understanding giving in corporations.

I already called "data" as this year's first buzzword. Those who make sense of it, visualize it, and re-imagine how to use it are also worthy of a shout out. Here's a great description of what data scientists do. I love the euphonious name of the big data company where I found that blog - Dataspora, which can actually be pronounced as da-TA-spora (though they may pronounce it data-spora)

This is one of those buzzwords that will have staying power - at least if these predictions about future careers are true. In true data scientist fashion here is an infographic of these data -

My favorite thing about data scientist as a buzzword? One of my favorite data scientists, Jake Porway of DataKind, tells me the term is already morphing into "insight scientists." Guess we'll wait for 2013 to claim that one.
Posted by Lucy Bernholz No comments: 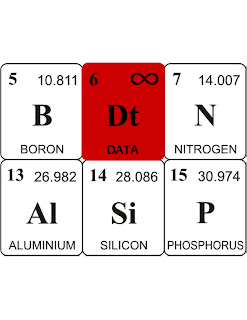 Data. Data. Data. It's exciting to see so much being done with and said about data in philanthropy these days. Some key conversations to check out if you haven't already:

This discussion on the opportunities for 990 data and the new leadership of Guidestar in particular, started by Alexander Berger on his blog, Marginal Change.

This post by Brad Smith of The Foundation Center on Philanthropy's Data Dilemma.

Coming up - a special edition of Alliance Magazine on data in philanthropy.

Posts from our discussion on Digital Public Goods - starts with data but goes well beyond - from the Stanford ReCoding Good project.

Back in 2010 in Disrupting Philanthropy I claimed "data were the new platform for change." I still believe that. In a recent discussion with Mayur Patel of the Knight Foundation I realized my thinking had evolved. I've used a lot of metaphors to describe data - platform, fuel, raw material. Mayur and I suddenly realized we were talking about data as essential elements - similar to the chemical elements often pictured in the Periodic Table of Elements. In this familiar representation the elements are noted by a common symbol and their atomic weights. These elements are the building blocks of the chemical compounds such as water, air, etc that make life possible. Some are extremely common, others very rare. By identifying these elemental pieces, chemists have been able to explain the existence and structure of the chemical compounds that give us everything from water (Hydrogen (H, 1) and Oxygen (O, 8)) to cell phones (Tantalum, (Ta, 73)).

Why does this metaphor work when thinking about data in philanthropy? Because these raw elements are only the beginning of the story. For data to be useful in philanthropy they have to be known, accessible, and compoundable (able to be mixed and combined). Brad Smith's post above is critical in thinking about this point of compoundability. If everyone tracks their data separately, calls things by different names, and holds onto them behind closed doors, well, that's like having hydrogen in one room, oxygen in another and being desperate for a drink.

Imagine what could be done if we could reverse the process by which we now collect and use data. Right now, every foundation collects, catalogues and makes sense of their own information. More and more foundations are beginning to share their raw data (again, see Brad's post for information on this), but we're still at the point where we are "mining" for information from institutional silos and trying to organize them.

Now flip that over - imagine we had a shared taxonomy (the coding elements) of and framework for (the equivalent of the periodic table itself) on geographies, social issues, funding types, population groups. The shared understanding and codes would be the default. Rather than working up from internal names of things to figure out if we are collectively working on the same issues we could start from there and go forward - where are strategies working? Where are dollars abundant and where are they scarce? Whose dollars follow whose  - public then philanthropic or philanthropic then public? Imagine if donors and doers everywhere were drawing from and contributing to a shared pool - a commons - of data. Today's data technologies make this possible, what we need to focus on are the legal, institutional, and cultural "technologies."

If (when) we start from the essential elements of information, and then slice, dice, share, analyze, synthesize according to our varied interests and concerns we will be using data the ways our current tools and capacities make possible. The late 19th and early 20th century is often thought of as the era of "scientific philanthropy," as tools of the industrial age created both great fortunes and (what were then) new institutional forms that mirrored the times. Drawing the metaphor forward, today we should be thinking of "information age philanthropy," which may be known for dispersed and open access to data, shared and mined by many, governed by rules that benefit and protect the public interest and personal privacy. How we think about the "table of elements," the collective use of data is particularly exciting now, for we are really shaping an era of new philanthropic practice. This is not just about 21st century philanthropy. Given the demographics of today's philanthropy and the advances being made in medicine, we should think of our experiments and innovations today as the early steps toward 22nd century philanthropy.

On a side note, I am honored to be called out in this list of "Women in Data" by O'Reilly Media. Made my day.
Posted by Lucy Bernholz 3 comments:

Here's the latest update from the work on ReCoding Good - we tried to make sense of the concept of  Digital Public Goods, benefited mightily from d.School facilitation, and tracked some additional thoughts on Tumblr.
Posted by Lucy Bernholz No comments:

By Jason Silva for TED Global.

Dedicated to those who believe in IDEAS WORTH SPREADING!!