We've come a long way with regard to technology and natural disasters. As Hurricane #Sandy rages across the eastern seaboard, I'll try to track new uses of ICT in natural disasters. Please send anything interesting you find my way.

#hurricanehackers are already collecting data into a live stream of the storm  - you can see their other Projects in Progress. 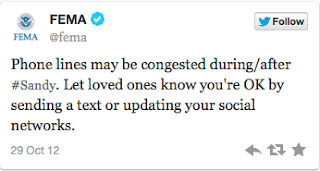 2) Apps such as Public Stuff, built as part of open government movement, are donating their back end systems to cities and neighbors to use for coordinating relief

3) Six apps for tracking hurricanes - from CNN. You can get the Red Cross app by calling "**REDCROSS" (**73327677) from your mobile phone. They will send you a link to download the app to your phone or you can download them directly from the iTunes or Google Play.

5) Google's got maps and tools for crisis responders.

6) Live webcams are popular - here's one on the USS Intrepid Museum and The Statue of Liberty. Here's from top of New York Times Building.

7) News sites like The Wall Street Journal and The New York Times are taking down paywalls so people can get the news. I wonder how much of this is response to competition from Twitter/Facebook as news source?

8) You can send a text message to find a shelter:
9) Twitter is donating Promoted Tweets (advertising space) to @RedCross and others

10) The technology to shut off the power grid in lower Manhattan, empty the train stations and subways, remove the water and rebuild the electricity connections - mind boggling to think about.

12) And here's some #datavisualization of the storm courtesy of FastCompany.

13) Should be some great uses from the contents of #CFACommons -

Seen something new in use of ICT for either preparedness, response, or relief efforts? Please add it in comments or cc me @p2173 on Twitter.