I'm finding it difficult to focus and track time. From what I gather, so are many others. These are (simultaneously) problems of the fortunate, signs of grief, life-altering though not threatening, and opportunities.

These days I'm not just writing and teaching about digital civil society, I'm watching as people all around me come to realize they're living it everyday. Some things I'm seeing -

Video conferencing is rapidly morphing into distributed broadcasting - I've attended hosted interviews with authors, a discussion on public policy among African American scholars, a comedy show, and a city council meeting - all essentially broadcast on video conferencing software. Some were free, some were paid. All were more interactive (thanks to hosts, moderators, and chat functions) than simply watching television. Some of them used several screens (the broadcast, the chat function, social media) incredibly well - incorporating audience questions, weaving social media comments into the chat and responses from the panelists back out into social media spaces. Some foundations are getting into the act. I'm sure nonprofits are doing the same.

Teaching via video conferencing allows me to connect across classes, schools, and disciplines. I've taught two classes simultaneously via one video call. I'm sitting in on seminars at universities in other countries. Doing this is one thing; doing it well is another. 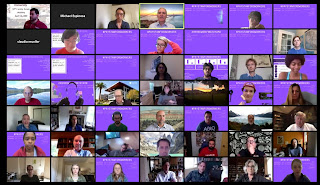 My email inbox and snail mail inbox look like December - fundraising appeals are flooding in - some from nonprofit organizations and as many from bookstores, restaurants, cafes, and other local businesses (the ones that were supposed to get the Congressional money - which seems to be going mostly...elsewhere). Donation requests from commercial companies - please take note of this.

There is no bottom to how data-sucking companies will use this pandemic for their own ends - Palantir has been awarded federal contact tracing contracts, Facebook is making "grants" that claim all the "grantees" data, and "contact tracing" apps are a scourge of this scourge.

Meaningful community organizing is really hard under shelter-in-place conditions. Governments are using the pandemic as an excuse to ban gatherings. How we come together for political and civic action during and after this is of critical importance - and being invented in real time now. It's not just about protest and organizing - it's all of civic and political gathering. Micah Sifry is thinking about this; we're working on it the DCSL; join us.

Your landlord is listening

By now you've probably seen at least some of the news about Zoom, the video conferencing program that has quickly become a verb, is full of security and privacy risks. It is sharing/leaking data to other companies (Facebook), being investigated by Congress and Attorneys General, not really end-to-end encrypted, and so on. It's also become a home for "networked harassment," as Joan Donovan puts it - zoombombing by racists, sexists, and other creeps (insert stronger word here).

You, who may have spent the last 21 days living on Zoom - for work, play, family, and exercise - may feel like putting your head down in resignation at this news. (Go ahead, I'll wait).

But we can also use this to really understand what it means to be digitally dependent. You've heard me refer to our digital technologies - the software, hardware, and telecomm choices we make - as our new landlords. We "rent" space from them and they set the rules. We "rent" space from them for our emails, our text messages, our video calls, our cloud storage, our shared documents, all of it. And, let's be really clear, unlike our landlords in physical space, the space we rent from our digital landlords is all open-floor plan and the landlord sits in on every meeting, taking notes that he keeps for himself (and uses for his own purposes).

With that image in your mind, your best bet for protecting the information you care about from your digital landlords is to assume they are listening, taking notes, and profiting from those notes. In the real world, if you could see your landlord sitting there at every meeting and on every call, you'd adjust your conversations accordingly. In the short term - the same is true with your digital landlords.

In the bigger picture, you can follow, support, and get involved with your civil society peers who monitor the digital landlords and keep the pressure on them and regulators to change the way these tools work. That's digital civil society in action.

For more on zoom see this from Joan Donovan, these from doc searls, and there's been good media coverage from Vice, the Verge, The Intercept.