I've been thinking about the role that  volunteers and nonprofits play in providing curatorial and editorial support to the internet ever since 2014 when I learned that Twitter was going to "partner" with several women's organizations following the murders in Santa Barbara, California that were carried out by a man in a self declared "war on women."

Facebook's dependence on NGOs to combat hate speech in Myanmar brought this up again. Especially when the NGOs told Zuckerberg, "No, you didn't live up to your end of the bargain."

And then I heard Tarleton Gillespie speak about his new book, Custodians of the Internet, which put to rest any naive fallacies I once held about these companies not actively curating their platforms. 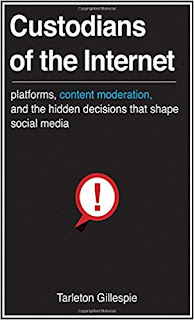 There was also  YouTube's announcement earlier this year that it would rely on Wikipedia entries to help it deal with conspiracy theories. The company didn't even bother to tell the nonprofit in advance (let alone try to consult with the nonprofit as if it might have a say about this plan). This hasn't worked out that well for either YouTube or Wikipedia.  Let's think about this. Wikipedia is run by a nonprofit but the work is done by a global network of volunteers, who - everyone knows - are by no means representative of the global population. YouTube is part of Alphabet, one of the world's wealthiest companies, and is itself one of the world's biggest social networks. It has it's own curatorial teams. And yet, as Wired notes, both Facebook and YouTube are outsourcing their responsibilities to nonprofits.

This seems unseemly even if you just think about it from an economic standpoint - big company relying on unpaid labor? Sounds like exploitation. When you start thinking about it in terms of the health of nonprofits or civil society the exploitation seems even worse.

Just like the open source community has built all kinds of technology that companies rely on, so too are nonprofits providing a kind of critical digital infrastructure in terms of their community voice, commitment to a set of ideals, expertise, and concerns for the vulnerable. Yet the current set of "partnership" arrangements seem destined to throw the nonprofit under the bus - the company saves money, gains reputation, and offloads both costs and liability. The nonprofit gets...what?