Gun violence survivors. The extent and reach of this as part of the identity of millions of people in the  U.S. was on heart-wrenching full display on Saturday, March 24. Thousands of people have survived the USA's totemic mass shootings (Columbine, Aurora, Charleston, Virginia Tech, Pulse, Newtown, Las Vegas, Parkland, there are too many to list). Hundreds of thousands, probably millions of Black people and others in poor, urban communities survive daily gun violence, perpetrated by both civilians and law enforcement. People in these communities have been naming the problem, identifying as survivors, and calling out the epidemic for decades. They survive despite the pain, grief, and identity-shaping nature of the experiences. Yesterday, people from across many different communities - bound by a shared identity that none of them chose - took full hold of the attention of the rest of the country, the media, the world.

Part of the NRA's success for so many years has been that gun owners identify as gun owners. It's not just something they care about, it's part of how they see themselves. This is the argument made by Hahrie Han and other scholars. When an issue becomes part of your identity, you act on it - you participate in civic life, you vote, you hold politicians accountable, you show up.

Yesterday was a full scale display of how broad and big is the group that shares this unwanted identity. The breadth and depth and multi-generational nature of people who understand themselves as gun violence survivors.

Now that we've finally heard it and seen how many we are, perhaps this shared identity will contribute to civic action of a scale and persistence to match.

The research I've been waiting for 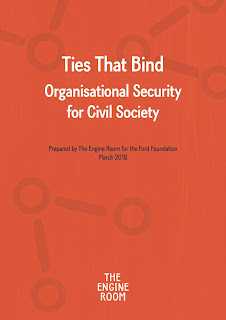 Thanks to The Engine Room and the Ford Foundation - this report clearly shows how the digital ecosystem is now core to civil society, the expertise needed, and the emerging infrastructure to support digital civil society. Read it now.
Posted by Lucy Bernholz No comments: