This letter, titled White People Show Us, from Angela Glover Blackwell and Michael McAfee of PolicyLink makes central what many would prefer to push aside. Racism is a problem created by white people. People of color suffer, but white people are the ones who created it, benefit from it, perpetuate it, and, I believe, also suffer from it. None of us are free when some are not. It's not enough to say this, we need to act to change it, persistently and continuously.

Civil society - associational spaces where we voluntarily come together to do things for others - is home to some of the most powerful forces for equity and anti-racism work. Historically, it is here, in civil society, that political power is built, change is crafted, protest and alternatives are envisioned, and pressure on dominant governing systems - which in the U.S. have always been tools for advancing white interests - builds until those systems change. It is long, arduous, daily work and power never cedes without pressure.

Systems change is particularly hard when the same rules that protect the rights of people to focus on building an equitable society and fighting racism protect the rights of people doing the opposite. Free speech and assembly - two universal human rights (and Constitutionally protected rights in the U.S.) - apply to groups with a range of views. This is by design. As is often noted, freedom of speech only means something if it protects the "speech you hate," not just the things that are easy to say. The right to peaceable assembly applies to groups on both sides of an issue. And a right to due process to determine what is protected and what is not sits alongside these rights, to make sure that lines can be drawn and limits set. Violence and the intent to harm are not protected. Not all speech is protected, and when it is, it's protected from government interference, not private counter speech, or action by non-government actors to determine that certain speech is not to be supported. The right to association is for peaceable assembly - it is not a right to gather to cause harm.

Civil society depends on these rights. It is strengthened by the intentional divisiveness that these rights encompass. In majority run democracies there are, and always will be, many minorities. It is the right of these minority opinions to be expressed - safely and peaceable - that buttress and support and legitimize the actions of the majority-run systems. When any powerful actor (elected, appointed, or market-driven) limits the right of minorities to organize and speak, we fast track out of democracy.

One of the biggest challenges today is that the Internet is an underlying space for civil society but we haven't figured out how to enforce our nation-bound, values-shaped analog norms and rules in this global, hybrid commercial/public space. Internet intermediaries (at many levels) host our discourse, our efforts at organizing, and our protests. They are not democratically elected governments, not signatories to human rights declarations, not publicly accountable as agents of the people.

They may not have chosen this role, but they have it - they intermediate free speech and assembly for people around the globe. In order to exist, civil society's fight for these fundamental rights now takes place on two fronts, facing both governments and Internet intermediaries. While this recognition will be new to some, there are people and associations that have been working on these issues for years, have developed procedures and policies for dealing with these issues, and can help the rest of think this through.

It's painful and ugly to want those with whom we passionately disagree to have the same rights as we do. Passionate disagreement is one thing. Violence and intent to harm are different, and due process is required for determining when this is the case. The intention to exclude, harm, dominate, reject, subjugate, or abridge the rights of others matters. When speech or assembly prepares for, expects, and provokes violence, violence often happens, and lots of people pay attention.

That momentary attention is important, but this is not the only way that racism subverts our society, nor is it the most frequent or possibly even the most damaging. Systems and rules built on racist assumptions and designed to perpetuate inequity are all around us, all the time, doing damage and needing to be undone.  Groups that gather armed and shielded, those that violently beat or murder people with whom they disagree, and actions taken to limit other people's rights to vote - these are all racist acts of violence. The first three are not acts of civil speech or assembly. The last one is not legal.

These are not easy issues. They are not limited to - or even fully exemplified by - horrific, public, violent acts of terror and physical harm. Civil society is home to many groups that know this best; thoughtful, informed experts who've worked to protect civil rights and liberties and those that work to fight racism and other hateful acts in digital spaces. It's time we recognized how much civil society writ large needs these groups, their work, and these rights.

Aligning your tech with your mission (graphic)

Yesterday I wrote about aligning your organization's tech with your mission and values. This has to do with making sure that your organizational approaches to privacy, consent, sharing, data use, etc. carry through from your board through to your software licenses.

Here's the "back of the napkin" from a conversation about this with some funders and nonprofits. 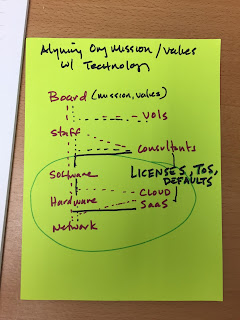 The tools and policies on digitalimpact.io are designed to help.
Posted by Lucy Bernholz No comments: