I'm honored to have had my first ever newspaper article published in Portuguese in the Brazilian paper Gazeta do Povo. It was published as part of the first ever Semana da Democracia - Democracy Week.

The link above will take you to the article, there's a photo below, and if your Portuguese is as bad as mine, the English original is below. 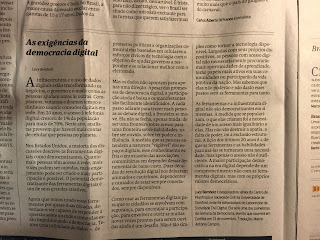 Digital data and infrastructure are changing business, government, and the ways that people help each other out. We now shop, vote, and donate money and time using networked digital connections. In twenty years mobile phone access has risen from 1% of the world’s population to more than 70%. This is the year that analysts predict there will be more mobile phone accounts than people on the planet.

In the United States most of the discussion these digital tools are often described as democratizing. As more people gain network access, more voices can be heard, more engagement can be created, and more participation is possible. The democratizing potential of digital tools is one of their greatest selling points.
Since we’ve now been using these digital tools for almost two decades, we should be able to answer the question of when and how they are democracy enhancing. There is a great deal of data – from political protests to community organizing based on mobile phones to civic technology efforts focused on helping governments be more responsive and engaged with their electorates.

But all the data do not point in one direction. Despite promises of digital democracy, voting rates are still low and protestors are easily tracked. And with every step forward, to bring more people into the digital conversation, the digital divide moves as well – it doesn’t close, it simply shifts from being about access, to being about skills, to be about voice, to being about power and influence. As people better understand the surveilled nature of digital spaces that knowledge has tempered the enthusiasm of community associations to rely on these low cost tools. Two decades into the digital revolution we are excited and cautious, dependent upon and tired of being always connected, always available.

How to use digital tools to engage citizens safely, to encourage participation, and to involve and listen to the many new voices now ready to be heard remains a challenge. It is not as simple as just making the technology available. Left to their own devices, people with digital access do not automatically seek greater learning opportunities, take more active roles in their communities, or take part in the public life of their nations. But we know they can’t and won’t take these steps without the tools to do so.

Digital tools and infrastructure are not innately democratizing. As they’ve become common, the thing they’ve created is a need for more equitable access to them. They will not counteract apathy or powerlessness or structural exclusion. The lesson of the last twenty years is that the tools and the skills to use digital tools well have become a necessity, but access is not sufficient. Greater democratic participation in the digital age depends on a commitment not to digital tools, but to the values of democracy itself.