The Future of Philanthropy is Feedback

The future of philanthropy is feedback.

Shaking up the long tail

Donors who use cell phones to make donations do more than give, they talk about it. They actively encourage others to give. They may not do much due diligence themselves, but they sure do spread the word.

Those insights come from a new report looking at text donations made to Haiti after the devastating earthquake of January 12, 2010. More than $43 million was raised through mobile giving for that disaster. Given how many of us carry our phones everywhere, it seems likely that we’ll do more of this.

The research, conducted by the Pew Center for the Internet and American Life, The Berkman Center at Harvard, and mGive (with support from  the John S and James L Knight Foundation) also found that more than half of the mobile donors to Haiti relief went on to make additional disaster related mobile gifts over time. This makes me wonder if the behaviors of these donors in a disaster will become a new norm – call them “roaming reflexive donors.” This kind of giving isn’t committed to a place, a cause or an organization – it’s immediate, “do-something and talk about it.”

While the ability to give small amounts of money quickly might seem like a fragmenting force for donations, the energy with which these donors tell others about their donations might serve as some form of “glue” and “direction” – sending donations to a few organizations with the most vocal early givers, for example.

I read this research right after reviewing a report from the W.K. Kellogg Foundation’s Cultures of Giving Project. That research notes that Blacks give, on average, 25% more of their income than Whites. Sixty-three percent of Latinos give. These are important insights about the “long tail” of giving, the $211 billion we as individuals give in small bits every year. These data beg to be correlated with data on cell phone use for texting by demographic group (also from Pew).

Every click we make on the web or on our phones leaves a “data shadow.” The collection of these shadows add up into patterns that we are getting much better at “seeing” through data analytics, visualizations, and surveys and research such as that done by Pew and Berkman.

There has been a great deal of speculation in the last decade about how the tech-enabled long tail of giving might change the way all of philanthropy works. One line of questioning asks if the wisdom of the giving crowd, now made visible, will inform nonprofits or big foundations? Online giving platforms have multiplied in recent years, each trying to get the right info to the small donors to motivate them to give.

The question this research raises for me is “what information matters to whom, when?” The best research on this question as it pertains to the "head of the tail" (wealthier donors) is in the form of the Money For Good reports (I and II). There have always been (at least) two sources of information for donors – their peers and the organizations themselves.  The explosion of third party information sources (separate from foundations) that rate, review and opine on different organizations mostly provide information on the front end to inform a gift. But if the Pew/Berkman research is right, and the order of action on mobile giving is “give, tell, move on” where does information fit in? And should the goal be to inform the key people in any given network, as it’s their opinion, recommendations and tweets that will influence others?
Posted by Lucy Bernholz 8 comments:

A few random philanthropy observations to start your weekend off right.

Buzzword buster
In conversation with some friends I realized there is one buzz phrase (not exclusive to philanthropy) that drives me batty. That term? Thought leadership (and its derivatives, specifically "thought leader"). Anyone who uses this phrase or claims to "thought lead" is, by definition, not. I guarantee that no one whose ideas have actually sparked other ideas or contributed to lasting change in the world ever identified him or herself as a thought leader.*

There is no such thing as thought leadership. There are thoughts, ideas, concepts, and provocations. Some people have them and share them. They are called "thinkers." If others join in and build on those thoughts, well then, by golly, you are probably having a conversation. Here's to a 2012 without thought leadership.

Public good
Robert Reich (former Secretary of Labor and now Professor at U.C. Berkeley) published this piece on The Decline of the Public Good. It's worth a read. Actually, it's worth much more than a read. Philanthropists should read it and wonder "where do we fit into this?"


Private resources and public good
I was delighted to be asked by Zocalo Public Square to offer up an answer to the question, "Is philanthropy too powerful?" as lead in to an event with Professor Olivier Zunz, author of Philanthropy in America: A History. (I reviewed the book in SSIR last month). Here's a long version of my answer to this question. It's influenced by Professor Reich's thinking above.

Stanford ReCoding Good
As many of you know, I work at Stanford with Rob Reich, Professor of Political Science at Stanford. (Bad pun alert) There is an "abundance of Reich-es" in my intellectual life. Rob's work on the new social economy and Professor Robert Reich's thinking on public good  combine to create a "conceptual sweet spot" for thinking about how we will create, fund and distribute public good in the 21st C. At Stanford we're looking at 5 big questions:


1. What does a post-Citizens United world mean for nonprofits, philanthropy, and the public good?
2. How is digital technology changing our conception of public accountability and public goods?
3. How will big data, the sharing economy, and open government influence philanthropy?
4. How can we better align our regulatory frameworks that govern and structure the creation of public goods with the technological innovations being made in bioscience, data processing, and other rapidly advancing fields?
5. What are the 21st century policy frames we need to encourage the use of private and public resources to help address our major domestic and global challenges?

We're launching our first charrette in a few weeks. We'll be thinking about the intersections of Sharing and the New Social Economy and what this means for how we create public goods. We're trying to bring together several existing but fragmented conversations and innovations - from sharing to political giving to government 2.0 to nonprofits and philanthropy - and we hope you'll join in, adapt to your field, add to, think with, and help shape this work. We all have a stake in how we use private resources for public good. You can learn more about the Stanford project here, here, and here. You can sign up for information here and follow the whole thing at #recodegood.

*The phrase makes me think of a person walking a bunch of dogs - only the leash leads to little cartoon idea bubbles. Thought Leader. Get it? Sort of like this: 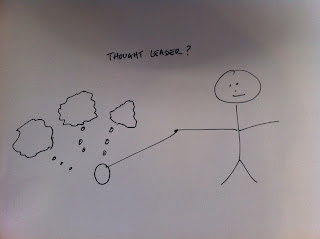 OK. Enough snark for one day.

House of Lies
Management consulting is the next industry ripe for portrayal on television - law firms and emergency rooms being so 1990s and 2000s.  Watch out.