The most important thing written about philanthropy in awhile 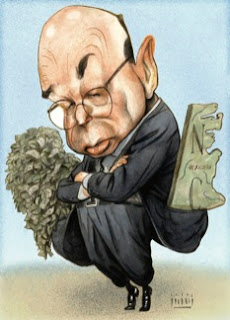 In my opinion, the most important thing written about philanthropy in a long time is this piece "State for Sale" by Jane Mayer in the October 10, 2011 New Yorker.

When you read it, you will think you are reading an article about state politics, campaign finance reform and Citizens United. I challenge you to read it and mark each and every time you come across the words "philanthropy," "foundation," or "nonprofit." And think about what the relationships, roles, and funding streams described in North Carolina mean for nonprofits and your giving.

In December of 2009 I published a database of online giving marketplaces that was developed by a Coro Foundation Fellow working on behalf of the Hewlett Foundation. I'm pleased to provide this link to an updated database, also done by the Hewlett Foundation. You should download this document rather than try to read it on the screen. It now includes 100 such platforms.

Mashable just highlighted "11 Innovative Crowdfunding Sites for Social Good" - you can check out their list here.
Posted by Lucy Bernholz No comments: 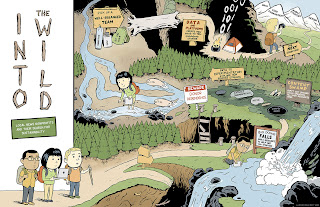 (Cover from Getting Local, Knight Foundation)

1) The California Community Foundation awarded one of its Unsung Heroes awards to Healthy City - a data driven project run by the civil rights organization Advancement Project. This is about data for action and social change.

2) Data Without Borders* held its first Data Dive in NYC and is coming to San Francisco on November 4th.  Learn more here and sign up here.

3) I lucked out and got to work with Stephanie Hankey of Tactical Technology Collective for several days last week. Tactical Tech's work is all about "turning information into action." They have fabulous toolkits (free, downloadable, creative commons licensed, open sourced) on their website. Plus, they have a robot, "ono," and s/he has a video collection. They have a book coming out in 2012 - it is already on my must read list. 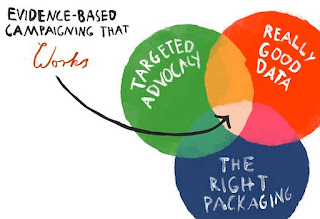 4) The Knight Foundation continues to dominate the voting in my "person's choice award for foundation data communications." Here is their latest report, Getting Local, on nonprofit news organizations.

5) The Digital Public Library of America, a project of the Berkman Center at Harvard is holding its first plenary session on October 21 at the National Archive. This is truly "data in action" - an effort to create a digital public library. I've been following this from "idea" to action and find this effort to be truly hope inspiring. The plenary session is over-registered but you can participate via live stream on October 21. All info is here.

*I'm on DwB advisory board.
Posted by Lucy Bernholz 1 comment:

This is a bad idea. As a society, we should not encourage the replacement of public responsibilities by private philanthropy. Philanthropy is fickle, it's too small and fragmented, and it's under the control of a few, it's not democratic. Its strengths in an ecosystem of funding options (public funding, commercial capital and philanthropy)  - choice, independence, and experimentation - become its weaknesses when one posits it as a replacement for public funding.

Of course, the key issue of our day is what is the "public responsibility?" Libertarians such as Ron Paul argue that the list of public responsibilities should be as small as possible - smaller government is what we need and we should leave business to do as much as possible. For example, today's NY Times reports that Paul wants to do away with the TSA and have airlines provide security. He believes that market pressures would induce the competing airlines to provide just enough security screening to be safe but not so much as to be intrusive. Given that security is a present day operating cost balanced against a potential future threat, I'd argue that the airlines would cut, slice and eventually abandon security measures as quickly as possible as they incur costs against the bottom line.

Yesterday's Wall Street Journal ran an op-ed suggesting that philanthropists start building bridges and invest in the nation's physical infrastructure. Just a few weeks ago I had a conversation with two colleagues about the "minimal viable role" of government. Defense spending was in there. So were roads. I guess I overestimated.

How about loans for businesses? Starbucks' is working with CDFIs to launch what could become a significant loan program for small businesses. The "Create Jobs" plan is good - it has good leverage, gives everyday people a chance to engage, and could actually provide meaningful resources. But don't fool yourself into thinking that a $5 donation through your coffee vendor is going to save the economy. CDFIs  grew out of the mutual aid efforts of immigrant communities a century ago, were boosted significantly by government support in the 1960s and have drawn significant private capital ever since. Their existence reflects a relationship between government, private capital, communities and philanthropy. They've become core parts of the nation's commitment to communities and small businesses (even if Howard Schultz had not ever heard of them until recently). Starbucks' philanthropy can expand this, build on it, and engage everyday people in it - that's all good. But it can only do so because of the base of institutions that government itself helped build and the regulations that require banks to pay some attention to communities.

Philanthropy has a role in the ecosystem of funding for public goods. It is one key way in which we use private resources for public goods - volunteering and impact investing being two others. Claims that philanthropy can replace public funding fail to understand its actual scope and potential. Counting on it to provide core public services is, among other things, simply undemocratic.

I've been traveling, meeting new thinkers, and seeing the world from vantage points beyond my norm. So many ideas are moving in my head - think of this blog post as literally a chance to grab some of them, "tie them down" for the nanosecond it takes to write them, and see if they spark insights for you.


The sharing economy is much more than just a bunch of neighbors sharing cars and tools. It could be the platform for the next iteration of social and political change.

Movements are really messy and what you see on the internet, television, and public statements is only one thin layer of what's really going on. What is the #occupy movement and how will it matter in the short and long terms?

The Post-Industrial Social Economy, a headline I blasted out a few days back, is real. We are creating (through the contraction of the formal economy, a slow shifting to informal networks instead of and in addition to institutional NGOs, the power of mobile enabled organizing, sector agnosticism about social change, and the legitimate elements of the social business movement  a new economy of good.
Here's a new book on sharing - Share or Die - that I look forward to reading.

I finished reading Jeff Jarvis's Public Parts on a plane a few days ago. He raises some interesting questions about the transformative nature of publicness. He also connects the "personal" public with the "shared" public - his own decisions about sharing information with changing community expectations about what information and resources are shared. I think this is important.

People my age (late forties) in eastern European countries have lived half their lives under communist autocracies and half their lives under capitalist democracies. They seem better able to reckon with the likelihood of real system change than I am - they've lived it. Some of the people I've spoken with have basically different understandings of "long term" than I do.  It's odd for an American to travel to Europe and feel like our country is "old," but that's how it felt to me. How do these experiences influence individual's commitment to a European Union (or to any political system?)

I'm honored to be one of the co-hosts for the launch of Laura Arrillaga-Andreessen's "back to school philanthropy must read" book launch. Please join us at Stanford's CEMEX Auditorium (Stanford Graduate School of Business) on Thursday, October 27, 2011. Program starts at 6:00, doors open at 5:30.

Giving 2.0: Transform Your Giving and Our World

Laura Arrillaga-Andreessen, Stanford PACS founder and Advisory Board chair will talk about her new book Giving 2.0: Transform Your Giving and Our World with introductions from Jim Canales, President of The James Irvine Foundation and Stanford Trustee. Laura takes Giving 2.0 readers on a fascinating journey through the fast-changing world of giving and read compelling stories of individual philanthropists. This is the Stanford and Silicon Valley main event for the book launch!