Suppressing Civil Society not by Money but by Data

This followed in the footsteps of Facebook kicking NYU researchers off of the platform for the work they were doing tracking political ads. (August, 2021)

The threats to both organizations and the research they were doing is a threat to any independent effort to hold the platforms accountable or to understand what is actually happening on these systems.

"Allowing Facebook to dictate who can investigate what is occurring on its platform is not in the public interest," said Damon McCoy, associate professor of computer science and engineering at NYU and one of the affected researchers. "Facebook should not be able to cynically invoke user privacy to shut down research that puts them in an unflattering light, particularly when the 'users' Facebook is talking about are advertisers who have consented to making their ads public."

Facebook controls its Terms of Service and controls who can access what data for independent research purposes. It can stop - and will - anyone doing research it doesn't approve. To tighten its grip even further, Facebook has taken steps to rein in or cut off access to Crowdtangle, a tool commonly used by researchers to make sense of Facebook data.

These are examples of a powerful company threatening and shutting down civil society accountability efforts and independent research - not by money but by data. All nonprofits and foundations should pay attention to this. 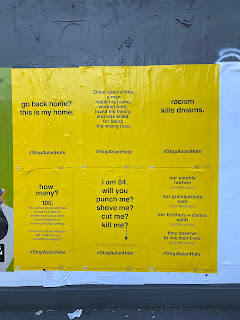 I walked by this on a San Francisco street on March 16. Then I heard of the murders in Georgia.