This is the 8th post in this series. Here are some more resources

4) It's amazing to me that any buses or subways are working in NY. That said, here's a (fake) version of what the NYC subway system would look like if it were mapped today. I got this on Twitter - don't know where it came from. 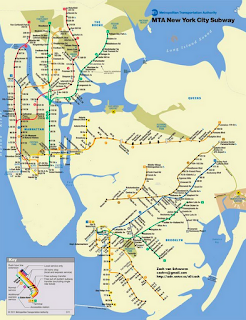 5) The biking community is out in force, helping people plan commutes and using bikes to charge phones.

6) In a similar bike vein, #OccupyWallStreet folks were re-directing themselves into a bike messenger service -

(The examples from the bike communities and #OWS remind me of how important these kinds of flexible communities can be. Organized for one reason, the personal connections and commitments can be redirected in times of emergency)

9) Pay phones became useful again - ah, inrastructure. Perhaps someone will install handcranks in these and USB ports so folks can charge cell phones.....?

10) Duracell sent BIG battery trucks to Battery Park City. Here's a teapot that turns steam into electricity for phone charging (via Kickstarter). Assumes you still have gas running to your stove.