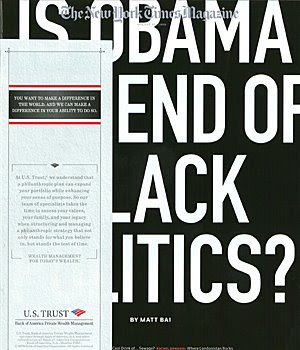 My post on Embedded Giving 2.0 elicited a comment that suggested this kind of activity - in which individuals advertise their chosen brands on behalf of their favorite causes - be called "embedded advertising."

Nothing embedded about the latest advertisement for philanthropic advising - yesterday's New York Times Magazine came wrapped in an ad for philanthropy. Literally. The magazine had one of those half-wrap paper covers on it that you sometimes see on magazines on the newstand. The content of the wrap (which I have right here in front of me and you can see in photo above):

Brought to you by U.S. Trust and Bank of America Private Wealth Management.

I'm not an ad expert but I am a lifelong reader of the NYT. I was pretty sure I had never seen the magazine wrapped in this way (recently the paper seems to just be putting out "special issues" to focus their advertising, including one on Giving and regular issues of Play and Key, focused on sports and real estate, respectively). Adweek confirmed my suspicion, this is the first ever "wrap" of the NYT Magazine. Adweek also confirmed my sense that philanthropic advertising was on the rise, quoting a U.S. Trust spokesperson on their "...$30 million in advertising" this year alone. And it is only August, not even close to giving season.*

*Maybe philanthropy advisers can pick up the slack from the auto industry, which an article in today's NYT notes has cut its advertising so significantly ($414 million less in first quarter alone) as to be contributing to the woes of the newspaper industry.