2009 - the year of philanthropy books 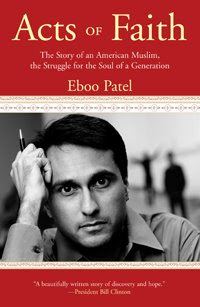 One of the nice things that has happened to me in the last several years is that I often get asked to read and comment on other people's manuscripts. This gives me a chance to learn from good thinkers as they are still in the creative process - an incredible gift. It also is exciting for me to have a bit of a sneak peak on books about philanthropy.

Several good articles and books should be coming out between now and mid-2009. Keep your eyes open for works from Paul Brest and Hal Harvey, George McCully, Bruce Sievers, Laura Arrillaga, and Steve Goldberg.

I've just finished Eboo Patel's Acts of Faith. It is an extraordinary, inspiring and hopeful story - one that recognizes the power of youth organizing in deep and future-filled ways. His observations about the effectiveness of religious fundamentalists as youth organizers is one of those insights that clarifies the chaos of world events in a profound way. If youth organizing can be so effective in fostering hatred and violence it stands that, with the right intentions, it can also be powerful force for religious pluralism, true co-existence and tolerance, and peace.

I will be bringing the book to my synagogue and our gay Jewish family camp. I find myself motivated to share it with others. This morning I said in conversation, "I felt this story on so many levels. You know, because I* have so much in common with a Muslim Indian-American Rhodes Scholar working class man from Chicago who is at least 10 years younger than I am."

Patel has one chapter on dealing with foundations. Everyone in philanthropy should read at least that chapter (everyone should read the whole book).

*For those who don't know me in person, I am a female Jewish New Yorker with Polish and Irish roots, living with my wife and son, who knows Rhodes Scholars because I attended the schools and universities that many of them also attend, but I certainly am not one.

Sounds like a very interesting book. Thanks for letting me know about it.

You bet. Thanks for stopping by.

I work with Eboo Patel at the Interfaith Youth Core (www.ifyc.org). Thank you for reviewing his book, and I am pleased that you liked it! Part of what makes Eboo's story so compelling is the action that he has taken in the world to ensure that other young people have a different experience. His organization, the Interfaith Youth Core, works to empower young people to build pluralism in their communities. I would like to share some resources with you and your readers which may be helpful!


The site for the IFYC Fellows Alliance, a group of undergraduate student leaders from diverse faith and moral traditions who are committed to interfaith action on their campuses, is located here: http://ifyc.org/fellows.

Videos from the 2007 Days of Interfaith Youth Service can be found here:

Finally, to keep up with what Eboo is doing in the world, you can check out his blog, The Faith Divide, found on The Washington Post: http://newsweek.washingtonpost.com/onfaith/eboo_patel/.

If you have any further questions about IFYC, please e-mail me at Samantha@ifyc.org.

Thanks for your work and have a wonderful Labor Day weekend!