Money laundering and the election

When I wrote, in 2010, that the Citizens United decision would lead to money laundering by nonprofit social welfare organizations I really didn't expect it to be as obvious as this morning's headline on the San Francisco Chronicle: 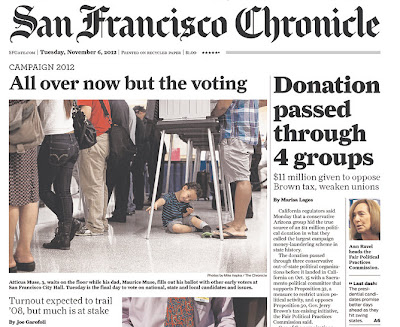 If you can't read the text of that right hand column, above the fold story, here is the opening sentence, "California regulators said Monday that a conservative Arizona group hid the true source of an $11 million political donation in what they called the largest campaign money-laundering scheme in state history."

There's every kind of get out the vote effort under the sun today - check out "yourexcusesucks" and the "#ivoted" nudge campaign on Twitter for just two of them. Please, vote. The election will be over tonight.* The damage done to our civil society by this kind of money laundering and trust-incinerating will still need you tomorrow.


*Yes, I'm aware that both parties have lawyers at the ready and there's a chance we won't be done with the election tonight. I remember November and December, 2000. I'm trying to stay positive.