Yesterday (Sunday) I attended a women's basketball game at Stanford (The Cardinal beat UCLA 82-59). Maples Pavilion, home to Stanford basketball is usually a sea of cardinal red. Yesterday, it was a sea of pink.

In honor of the Stanford Cancer Center, the team's many faithful were wearing pink t-shirts, sweatshirts, even pink baby carriers. The Ogwumike sisters (Stanford star players) both sported pink headbands. Several of the UCLA players work pink sneakers. As soon as my son and I entered the arena we knew three things - basketball, women, and cancer.

That's how powerful a symbol pink has become. The color - in mass quantities - registers on the brain as a symbol of cancer. Not as the symbol of a specific organization, but as a symbol of a disease, those who've succumb to it, and its many survivors and memories.

This was enormously powerful to me because of the events of two weeks prior. Here's a summary of what happened in the week leading up to Super Bowl Sunday. The text below was jointly written by Allison Fine, Beth Kanter, Stephanie Rudat, Amy Sample Ward, Lisa Colton, and me. Similar versions with their own additional commentary can be found  on allisonfine.com and bethkanter.org.

The document below is our attempt to do a rapid reflection on a set of activities. Posting it here and on Allison's blog and elsewhere is our way of sharing what we learned and of inviting you in to the conversation.

From my own perspective, these events indicate an important new expectation of transparency for nonprofits and foundations. Just as Bank of America, Verizon, the legislative sponsors of SOPA and PIPA, and the users of the Path sharing network have discovered, your customers, your supporters, your voters and people moved by a cause are paying attention. They care about the issue and will let you know when they support you and when they disagree with you. This isn't a "maybe," this is the way it is - as the story linked above on SOPA/PIPA calls it, "It's a first draft of the future."

Nonprofits and foundations are used to being held accountable by their boards of directors. That governance structure is our 20th century answer to "how to hold independent, tax exempt organizations accountable to the public." It is not a 21st century solution. This is not simply a matter for crisis communications. It's even more than the free agent/fortress model that Beth and Allison write about in The Networked Nonprofit.

Today's tools and expectations would not lead us to create the kinds of governance models that we built a century ago. It's not enough to think about adapting old models to new tools, although that certainly needs to happen. We are building new models. Just as garage inventors are out there creating new technologies they are also out there creating the organizations, governance, accountability, transparency and privacy models that fit our current capacities.  These are the models that will survive the next 100 years.

Reflections on Take Back the Pink Campaign

"We're not good at thinking fast. We are good at feeling fast." - Clay Shirky


This reflection document is our group effort to capture and think about a flurry of social media activity that we organized last week. It includes a chronology of what happened, when, immediate results of our efforts, and lessons learned. We hope others will add to the document and share their own reflections as well.

The Catalyst: The Susan G. Komen Foundation Will Not Fund Planned Parenthood’s Breast Health Screenings Beyond this Year.


On Tuesday, January 31, 2012, the AP reported that the Susan G. Komen Foundation’s board had decided to stop providing grants to Planned Parenthood affiliates to support breast health efforts. As word began circulating on social media channels like Facebook of Komen’s decision, Planned Parenthood posted, and emailed out to their supporters, a petition created by a supporter.

Komen’s decision would discontinue financing for nineteen of Planned Parenthood’s eighty-three affiliates, which received nearly $700,000 from the Komen Foundation in 2011 and have been receiving similar grants since at least 2005. As reported by The New York Times here, the decision was political: the board created a policy of not funding organizations under government investigation as a strategy for not funding Planned Parenthood.


The announcement angered a large number of people who had supported Komen by walking, running and donating for decades. The Komen pink ribbon, which the organization has fiercely and litigiously protected over the years, has dominated the breast cancer research landscape for years and overshadowed many other effective, transparent organizations in the breast cancer arena. The deep and fundamental sense of betrayal on the part of Komen supporters, many of whom are also Planned Parenthood supporters, fed an outpouring of anger and acrimony aimed at Komen by email, on Facebook and Twitter.


As Kivi Leroux Miller reported on her blog, the outpouring of anger picked up steam as Komen was noticably absent from the social media conversations.


How did we organize for a collective action in a fluid situation?

Petitions and expressions of outrage felt good, but didn’t seem like enough tangible action to make it clear to Komen that their action was outrageous. Allison Fine started an open conversation on Facebook to discuss this. Out of that conversation came the idea for an online fundraising effort to support Planned Parenthood using Causes on Facebook called, “Komen Kan Kiss My Mammogram.” She circulated the link by email and on Facebook.

On that same Facebook thread, Deanna Zandt reported creating a Tumblr blog called Planned Parenthood Saved Me. The sites enables people to tell their personal stories of how their lives were improved or saved because of the health screenings services at Planned Parenthood. Here is one story from the blog:

Later that day, Beth Kanter created a Pinterest website with the same name capturing the growing number of images expressing anger and displeasure at Komen and posted on her blog about the anti-Komen activities over the previous 24 hours.

From Beth’s link on her blog to the Causes fundraiser, there were 3,800 click thrus out of 3,800 tweets with the link - pretty amazing.

Again, back to the Facebook open, thread, an interesting exchange took place between Tom Watson and Lucy Bernholz:

The conversation shifted to how to catch the attention of some the Super Bowl’s enormous audience. Based on the past few years, the combination of the largest media event of the year, the controversy around Komen, a long-time partner of the NFL, and social media (it was reported afterwards that 11.5 million tweets were sent during the game) would be fertile ground for a protest of some kind. An idea developed to capitalize on the upcoming Super Bowl and the partnership the NFL has with Komen and make a loud statement about the need to take politics out of women’s health issues on Twitter by “jumping” the Komen hashtag. We were aiming to capture just a small sliver  of people paying attention to Komen on Super Sunday, self identified by their use of the Komen hashtag of #supercure, to broaden the conversation about breast cancer and women’s health beyond Komen.

And a meme was born.

Great idea! Ummm, what’s “jumping a hashtag” mean exactly? We weren’t sure, but we had three days to figure it out!


We decided that surprise would be a necessary element to the planned Sunday attack. We began an email thread to supercede the Facebook conversation. We invited the participants from Facebook to join the email conversation.


Amy Sample Ward set up a Google doc that would serve as a landing site to explain the planned jump. We would plan by email in advance of the Super Bowl. The instructions on the Google doc were:

Beth also created a wiki with more information and resources for people interested in joining the Take Back the Pink effort.


We had built up a full head of steam by Friday when Komen announced it was reversing course and would allow Planned Parenthood affiliates to apply for future grants. Our group unanimously decided to continue our plans for the hashtag jump.


As a result of Komen’s reversal, though, we had numerous conversations about shifting the focus of our efforts from an anti-Komen message to a more positive message. There are a lot of resources and organizations working to eradicate breath cancer and for breast health. We realized that the group of us cared deeply about the issue and knew there were many organizations doing good work.  We wanted to take a positive tone of support for women’s health efforts and helping people understand there are lots of choices for how to be active. By highlighting a variety of organizations and movements on Facebook, we created a resource for people to keep them engaged on women’s health and ending breast cancer if they felt betrayed or discouraged.


Over the next twenty-four hours our goals evolved and our email group expanded significantly and eventually splintered. We quickly realized that it was a mistake to try to organize such a large group by email; it’s not a good vehicle for large group conversations. In addition, people added to the email list without their permission felt they were being spammed, not a good route to engagement! A better strategy would have been developing a plan of action with a small group, then reading out to people individually and pointing them to the Google doc with a clear plan and requesting their support and action. If we were going to continue to use email to invite more people to the effort, a better strategy would have been to  invite folks in small batches with an invitation to opt out immediately and get them off the list the minute they ask.


On Saturday night, the group on the email thread decided that an embargo of the effort until Sunday would be counter productive, we needed to get the word out sooner to encourage people to participate on a day they may not ordinarily use for protesting and awareness raising. Saturday night, Stephanie Rudat created a Facebook page with an eye-catching and very sharable logo:

The Facebook page became a central organizing spot for aggregating resources, plus positive infographics on breast cancer in order to drive supporters to a permanent home.   We didn’t have the time to organize a full-scale blogger outreach campaign, although our effort was covered by Blogher.


Late Saturday night, Lucy kicked us off with a simple tweet, “Join us tomorrow to #takebackthepink #supercure. 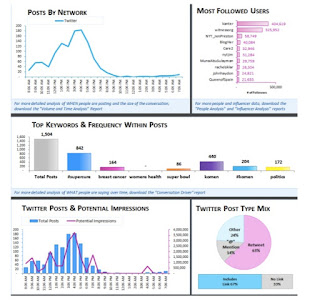 The Twitter User Who Drove the Furor Over Komen and Planned Parenthood
http://news.yahoo.com/blogs/signal/twitter-users-drove-furor-over-komen-planned-parenthood-160326208.html

Irrevocable Damage: 24 Hours in the Life of a Komen Executive
http://www.buzzbox.com/hillary/MyBuzzBox/2012-02-04/komen:planned-parenthood/?clusterId=8431755&utm_source=twitterfeed&utm_medium=twitter