Thinking about the future in a room full of history 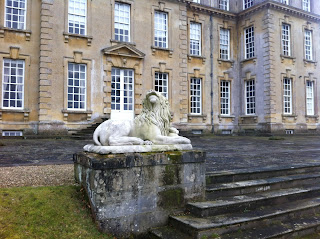 It's not often I that I get to walk in Winston Churchill's footsteps. This past weekend I had a chance to think about the future of philanthropy with three dozen philanthropists, advisers, scholars, and others at The Ditchley Foundation. The Foundation is housed a manor house in Oxfordshire where Churchill often stayed during World War II, on the premise that his own lodgings were likely bombing targets. I'm not sure if this concern is on the mind of the Ditchley lion (photo above) but he is the first such guardian I've ever seen who seems to be scanning the skies.

In the midst of Downton Abbey madness it was extra fun to "walk the manor paths." We did do some work - here are my reflections.

1. Fascinating discussion about the potential of philanthropy in 21st century to not be a mere byproduct of capitalism but be a positive force of influence on the shape of capitalism. Global income inequality may trigger major changes to capitalism, de-legitimization of philanthropy...

3. What info tech enables that philanthropy as we've known it definitely needs:
4. New policy domains - 20th century philanthropy defined (in US) by trust and tax law. In 21st C will it be defined by (can we shape it by):
5. When we talk about technology and philanthropy in 2012 we still focus on internet technologies. I think the future is likely to be more shaped by nanotechnology, biotechnology, genomics (the philanthropy of the body - human tissue - is an interesting place to look for this future).

We have social media ... social networks ... social capital ... Why not social money and social banks?

Very interesting questions.If we have social money and social banksone day,maybe the world is perfect!

Everything seems to be on "social" these days. But the concepts you've brought up are truly worth thinking about.

Great Article and very fascinating. Thanks for the insight