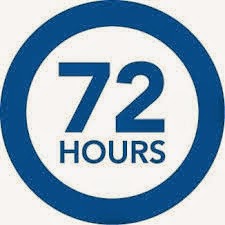 I grew up in New York. Every time the weather man predicted a hurricane my mom would order us to "fill the bathtubs." On a few memorable occasions during my childhood that action proved useful as the tubs became our only source of flushable water. Most of the time the danger passed and we just emptied the tubs.


The first night I arrived in the Bay Area I was woken up around 4:00 am by the subway going underneath my grad student apartment. Except it wasn't the subway, it was an earthquake. Not big enough to wake the locals (especially just after the Loma Prieta quake in 1989) but it rocked this transplant.

One thing I immediately learned to respect about California cities was their overt attention to  emergency advice. NERTs (Neighborhood Emergency Response Teams) have regular sign-ups. The local fire station was happy to advise on earthquake preparedness kits. The city is dotted with billboards asking "Do you have a plan?"

The other day a colleague and I were discussing the Rockefeller Foundation's 100 Resilient Cities Initiative. As it happens, the colleague works for Palantir, which has made a Clinton Global Initiative commitment to help cities integrate data systems to improve their disaster response - a critical part of anyone's definition of resilience. I started thinking - what would data-informed resiliency look like?

What data do cities already collect that, with the proper foresight and integration, could be useful in disasters? And how can they collect, use, and share the data in ways that protect personal privacy and that best serve the poor, infirm, and elderly (as opposed to discriminating against them)?
I'm not an expert in disaster relief (obviously). But there seems to be lots of potential for using existing government data to power rescue and response efforts.

I've been impressed for a long time with the collaboration among data and tech activists across communities. TechPresident alerted me to a new portal on GitHub highlighting government-citizen code collaboration and the recent CodeForAmerica Summit in San Francisco had coders in from cities all over the country. The Open311 project seems like a good model - build it and share the code across cities.  Whatever type of natural disaster your city is prone to (hurricanes, earthquakes, tornadoes, floods), we're all prone to the same man-made disasters. We'll all have similar needs in those first 72 hours - food, water, medical care, power, evacuation. Resiliency is a good framework in which to think about these issues - if for no other reason than to do a "equity check" on the data our cities actually collect.

For the local data to be most useful, you need local online spaces (open ones NOT resident-only gated communities IMHO that ban public servants and the police who don't live in the exact area) where people who live, work, and serve a community can connect when needed and use the data collectively.

This is, I know, pretty totally off-topic (and, as a parent in a tornado-prone community, I am actually really interested in the topic itself), but the post sparked my thinking about something a student shared recently, about how she shared unemployment data from her community with a client who was struggling with being unable to find a job. She found that his understanding of the data context surrounding his situation (they looked at not just the overall figures, but at his demographic and industry/sector, too) fostered his resiliency by helping him to locate the cause of his problems in the larger structures, instead of solely as his own failing. He's now employed, but she really views that conversation as pivotal in sustaining him during that difficult period. Anyway, I know, tangential, but, still, data and resiliency and transformation.