Metadata for #Good - the Digital Public Library of America 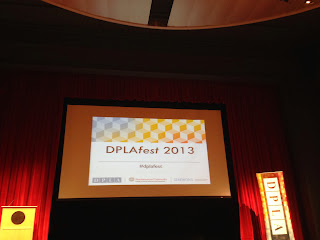 Libraries are core institutions of communities, of societies, of democracies. I had the great pleasure of spending the last two days at a festival hosted by the Digital Public Library of America (dp.la) - one of the many efforts that I see as being at the very heart of digital civil society.

What is dp.la? There's an official mission statement - written 3 years ago by 40 people and still going strong today. Here's some of what I'm thinking as I wait to go home:

Here's a #vizthink capturing some of the ideas from today's opening session made by @willowb100.

The events in Boston this week had originally been scheduled to take place in April and were postponed in response to the bombings at the Boston Marathon. At that time Dan Cohen, the Executive Director of DPLA, wrote these words:


"I see the building of a new library as one of the greatest examples of what humans can do together to extend the light against the darkness. In due time, we will let that light shine through."

The dpla  - its communities of activists, scholars, supporters, coders - truly shone this week.

As someone whose work straddles academia and nonprofit social change, I care about this very deeply. I have a real problem with the commodification of knowledge and the extent to which my own students, to use a micro example, are sent really harmful mixed messages, immediately after launching their careers: on the one hand, that they should be lifelong learners, committed to improving their capacity to effect social change and, on the other hand, that they will be denied access to the very information that we like to think can feed that transformation, unless they can afford steep access fees. Especially given the scale of the challenges we face today, we must do better.