In the newly released Blueprint 2012 I talk about how political contributions and charitable giving may well become part and parcel of the same "change strategies."

I use a "galaxy/universe" metaphor to show how charitable giving, impact investing, and political contributions are all part and parcel of one universe. As donors and changemakers we are traversing this universe, making decisions about our resources from each of the galaxies. 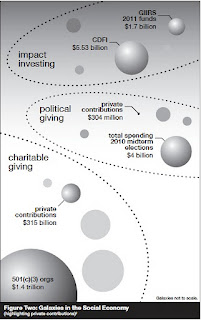 I was surprised and delighted to see a similar metaphor used in the newest issue of Mother Jones Magazine where they write about the emergent relations between 501 (c) nonprofits and political giving. All of this is brought to us courtesy of the Supreme Court decision in Citizens United vs the FEC.

Mother Jones also includes a closer look at the content of the political giving galaxy - here's a snapshot (Photo from Mother Jones, Courtesy of BoingBoing) 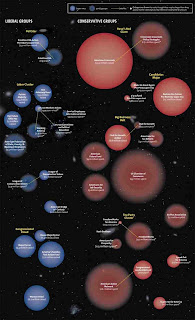 This issue of Mother Jones issue includes the decision tree infographic below. Whatever your politics, policies, or charitable interests, these are the enterprise decisions you are now navigating. The decision tree walks a donor through the tradeoffs of anonymity, tax deductibility, and other factors that are now in play. 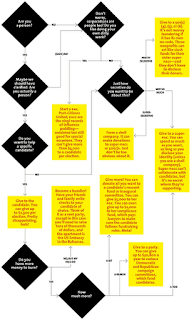 I was quite struck by this, as it mirrored a conversation I'd recently had with a real life large scale political donor. He told me of a conversation he'd had with a campaign fundraiser, who basically walked him through these options on the phone. And when he got off the phone he said, "Whether or not I mix my philanthropy with my political giving this way I know that others will be doing so." I found myself also wondering if the nonprofit development directors calling him were aware of the blend of options he was now considering.

This is the new social economy.