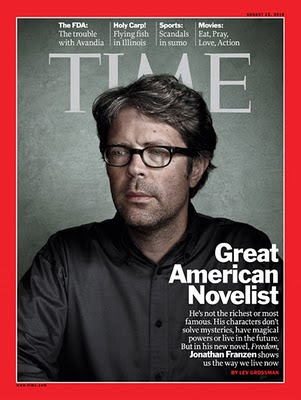 Unless you've been under a rock lately you've heard about Jonathan Franzen's new novel, Freedom. In fact, you could have been under a rock. However, if that rock happened to be in an airport you still would have heard about the book - not just because of the cover of TIME (pictured above) but because Franzen is featured in this month's copy of United's Hemispheres magazine. Oprah just picked the book as her monthly Book Club selection, which is causing a big stir in the literary world (she and he had a fight a while back). There's also been a Twitter-bate about whether or not male authors who write about family get awards and women authors who write about family get...not much. But I'm not here to discuss the book's literary merits or the gender politics of the publishing industry. 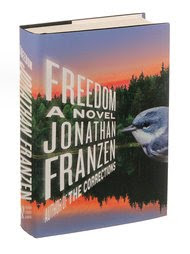 There are, to quote from Jon Stewart's new book Earth, 3000 quintillion reviews of Franzen's book. I've read the book, a few of the reviews, and heard the author interviewed. I'm here to tell you something that none of those reviews will tell you: philanthropy at its worst plays a part in the story. Corrupt corporate leaders happily hiding behind a guise of do-good environmental philanthropy - and the impact they have on their willingly self-deceived employees - are on full display.

The book is being hailed as "a masterpiece," the great American novel, the voice of post September 11 America, etc. etc...So I think Franzen's little background set on philanthropy, nonprofits, corporate greed, and political power is noteworthy.

Now you should not only read it, you can also write off the cost as a work expense. A tax dodge that the folks in the book would probably just love.

Lucy - you made me laugh! Dang I already downloaded and paid or I could join the ranks of the corrupt and cynical. I loved Corrections and am saving Freedom for a long plane trip in November.