"Co -" the buzzword that keeps on buzzing 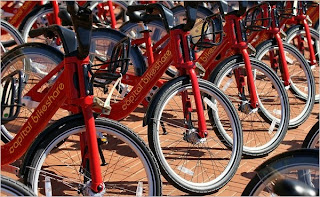 Early last week I declared "Co-" philanthropy buzz -prefix #6 for 2010. This refers to Co - as in co-housing, co-working, co-creativity. I referrred in that post to the book, What's Mine is Yours,(WMIY)  as the manual for this buzzword. Then Lisa Gansky's The Mesh came out and I added another manual to the list. Then a report on co-creativity came out and I added that to the list.

Today's New York Times picks up on this trend and notes that Yochai Benkler, one of the most important thinkers I've run across on all things networked has a new book coming out (January 2011) called The Penguin and the Leviathan, in which he will "focus on the explosion of cooperative endeavors, both online and offline." Given that Benkler's book, The Wealth of Networks was one of the most thought provoking and helpful books I've read on the commons and what really matters in an "information economy," I've put The Penguin and the Leviathan on the top of my watch list.

The header over today's NYT article by J. David Goodman is "Conspicuous Cooperation," a play on the "Co - " alliteration of collaborative consumption.

What will all this mean for philanthropy? I'm noodling on this but here are some early thoughts:

If Benkler or Gansky or their publicists are reading this, I'm happy to review both The Mesh and The Penguin and the Leviathan in this space, just send me copies. So far "Co - " is showing the most buzz of the 2010 list.

I love your blog! I recently just started following it since my introduction into the Impact Investing industry and SME and philanthropy sectors.

I found this article on Gates which I think you might find interesting:
http://www.prospect.org/cs/articles?article=gatekeepers

Hope you enjoy it!
Ankita