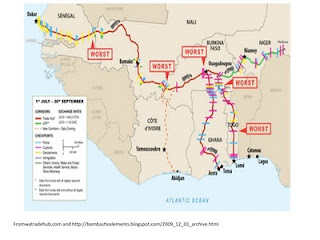 Crowdsourcing changes the lines that define the "inside" and "outside" of an organization. This is the real revolution of Ushahidi and similar tools - the awareness that the people in the situation are a source of information about the situation, whether it be a snowstorm in the US capital or an earthquake in the poorest country in the Western hemisphere.

It's not the technology, it's the behavior and expectations about where information lives, who has it, and who can use it that will change how change happens. The poorly copied photo at the top of this blog shows a map generated by text messages from truck drivers as they pay bribes (Hat tip to Megan Smith of Google.org). The truck drivers become not just the people most immediately affected by the corruption, they also become news sources about the corruption and a step toward a solution to the corruption.

At a discussion earlier this week with a class of incredible high school juniors and seniors involved in their school's journalism program, I learned of a service called Twilio. This lets anyone set up a standard SMS number to which people text information. The students were considering setting this up for the school paper/website so that all 1900 students at the school could contribute "news" as it happened - whether it be updates on power outages, information about neighborhood events, or real time coverage of the prom, a teachers' strike, or the lunch menu. Talk about changing who's inside and who's outside. All 1900 students become "community sensors" for the reporters, editors, publishers of the news. One doesn't replace the other, it augments them and changes how they each relate to the final product.

Then I read this beautiful speech from Crystal Hayling about who's inside and who's outside philanthropy. Under the heading, "Five things we know but keep forgetting," she reminds us that technology is just a tool, but it's a power tool. From the Silk Road to interstate highways, from radio to television, from the internet to smart phones, technology changes how we connect and with whom. It changes to what information and networks we are adjacent. And, in doing so, it changes who is inside and who is outside.

Here's the slidedeck I shared with the students - examples of ways that data and crowds are changing change.

Lucy, I appreciate your clear thinking and writing on this.

I think the real work now is happening neither "inside" nor "outside" organizations -- it is emerging "between and among" people, in ways that are more adaptive to emerging reality and therefore more effective.

And, a key part of our collective work is to make sense of these new ways of working, without force-fitting them into our old dualistic boundaries.

Thanks for inspiring us in the exploration.

Matt
I agree with you - as we go through this transition we will perhaps over-rely on the familiar language and forms until we can adequately describe the new ones.