War is not good for philanthropy 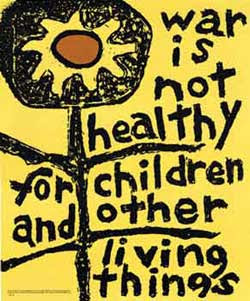 War is not healthy for children and other living things.

Sadly this slogan from my childhood is still on t-shirts today, during my child's childhood. It is also the headline I would have used for this report:

“Collateral Damage: How the War on Terror Hurts Charities, Foundations, and the People They Serve,”

The paper is described as a discussion of "how short term undemocratic policies are constraining the critical activities of the charitable and philanthropic sectors. In addition, the paper states that such policies inadvertently stifle free speech and slows down terrorism-fighting efforts. According to OMB Watch and Grantmakers Without Borders, “the current U.S. counterterrorism framework is not working well when it comes to U.S. nonprofits. Rather than recognizing the sector as a valuable ally in the war on ter ror, government unfairly characterizes nonprofits as conduits for terrorist funding and a breeding ground for aggressive dissent.”

I am often shocked at the amount of money spent on national defense versus spent on education, healthcare, internal and international aid. Imagine if we spent even a fraction of our defense budget trying to help the world and our own people. Would the US be viewed differently?