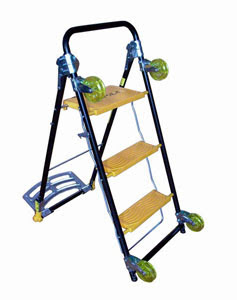 Maimonides was a 12th century Spanish Rabbi who developed, among other things, the concept of the "a ladder of giving" which discussed 8 steps of giving, from the first rung of "begrudging giving, only when asked" to the highest step of "giving without attribution, whenever needed, and such that the recipient becomes self-reliant."

Two technology trends seem to take this ladder and streeeeeetch it into something else. The first trend involves social networks and giving. Ever since Facebook opened up its code to developers the techy philanthropists have not been sitting around idle. Care2 has created a Facebook application that lets Facebook users add cause-related petitions to their pages. They are not alone, FirstGiving has a soon to be public Facebook application that will let people use their pages for fundraising. These join several Facebook applications that let users give virtual gifts to each other.

The second trend is the use of search engines to donate cash to causes. I've written about these, including EveryClick, GoodSearch and GoodTree. Now there is (at least one) company that will create custom search engines for specific causes. These engines intend to donate portions of ad revenue to the designated cause. There are two such sites, CatchTomorrow, that donates to public schools and Charteroo, which funds charter schools.

Taken together, these two trends reveal an odd paradox of philanthropy - the first group, those related to Facebook, are all about individual identity, social networks, and giving. Its "ego-connected philanthropy gone high tech." The second cluster - the search engines - are all about "giving without giving" - they make it easy to drive money to causes you care about, but not your own money. These approaches take embedded giving to a new (low) level - they make the act of giving almost invisible, and the financial impact of giving non-existent - in other words, its easier than ever to give away somebody else's money.

I'm not sure what kind of ladder these would fit on.

Hi Lucy,
It's been a while since we've been in touch. Thanks for including Firstgiving's upcoming FB application here...the opportunity that Facebook offers to people to really engage their own communities is fantastic, and we're excited to be doing something to help people take action to support the things they are passionate about.

It's not really "someone else's" money....it's the search engines money earned for sending traffic to the advertiser. And I disagree with this form of giving being invisible since engines like Charteroo.com keep charter schools top of mind amongst it's users. What better way to raise awareness by using a tool like a search engine that is already being used by millions of people daily?