I wrote this about the SHARE Conference. Here's Beth Kanter's on the same conference, and here's a great post from TechSoup. Here's part of a twitter exchange Beth and I had across the plenary sessions: 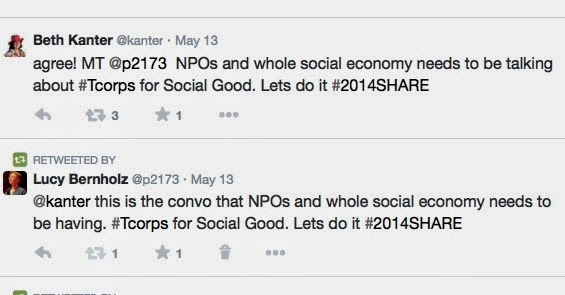 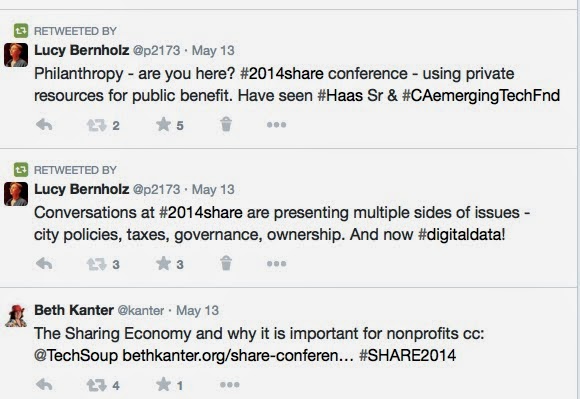 I wrote my post in the middle of the conference, so with the benefit of a few hours away here are two other ideas:

1) I sat in on two discussions, one led by companies and one led by users, about creating "portable identities" for people. The companies were interested in ways to share data across platforms, make life easier for their users, and help simplify the process of checking reputations and trust from platform to platform. The users raised the idea in terms of being able to "control their identities" and be active civic participants, moving from community to community.

It's a data thing, so of course it interested me. But it also struck me as potentially a differentiating characteristic of tech-enabled sharing platforms and potentially some sign of "what's a sharer." I also wondered if other types of data-heavy, identification-based companies (no names needed but think of every major search engine or social media platform) would be in the same conference with their users and identify a similar solution to two somewhat different needs. I also wondered if such a conversation was happening anywhere among nonprofits and their constituents/users/donors? Keep in mind that just because users get civically engaged, doesn't mean they're a) going to do so on behalf of a company's agenda or b) not use that same energy of engagement to raise questions about the company itself.

2) Sharing companies with robust digital platforms have really interesting digital data that could be of use to researchers, policy makers and government officials. Want information on current transporation patterns (Lyft, Uber, Car share, bikeshare)? Want information on tourism patterns (Airbnb, Homeaway)? Want to look at structural racism, affordable housing or daycare, or gender and safety issues? (analyze use patterns from any of the aforementioned). Will these companies hold the data back and fight subpoenas from AGs offices? Will they negotiate with users to release data for public use? Are these data sets part of the "public benefit" potential of these companies and will they argue such when the inevitable battles between nonprofit and for-profit versions of home or car sharing services arise? Can cities and sharing companies strike pro-active data sharing deals that protect users privacy, inform public policy, and benefit communities - without going to court?

Thanks for linking. One thought I had about this was whether there would be a new form of CSR - after hearing about AirBN donating to their member's causes or investing in charitable projects, but then again ...