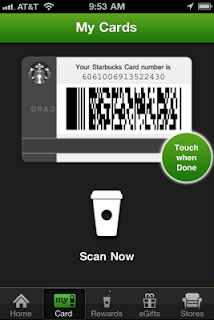 I find out about some of the most interesting things I know through Twitter. That in itself is worth noting. Lots of people complain about information overload in our digital networked age. I'm marvelling in how much I know that I wouldn't know if it weren't for these tools and relationships.

On Sunday I heard about Jonathan's Card - an experiment in mobile currency - in which some guy named Jonathan Stark will buy you a cup of coffee using his Starbucks card (the one pictured above) if you take a few simple steps. What he's really playing with here is the ability of complete strangers to give and get small items as well as the fungibility and frictionless of money on mobile devices.

Here are the instructions for using Jonathan Stark's card. Note, you can get a coffee and give a coffee. Basically, he's got one loadable card that anyone can use for payment or add funds to for others to use. The experiment seems to have been underway since July 14 - at least that's the date of the first blog post I found about it. Users spent the first $30 Jonathan loaded on to the card in a matter of hours. He reloaded it once, and then the public took over - using it and reloading it. A quick scan of the card's twitter stream shows people adding $10, $50 and even $100 as the card nears empty. Developers have built a few graphic apps off the site to show the rise and fall in card value.

What on earth might this have to do with philanthropy? Well, first, it's an experiment in money, giving and getting. So whatever is learned may be useful for thinking about how we will use money (or its API, digital, mind-meld equivalent) to give and get in the future. Second, it's being built in such a way that Jonathan hopes other software developers will adapt it. Again, a set of practices (open sharing of ideas for others to use and improve) that has everything to do with how we might be making change (how we should be doing it, some will say). Third, nonprofits and philanthropists are playing with mobile technology for giving just as retailers are investigating mobile money for purchasing. I'm curious about these experiments for one big reason -- I've argued for years that philanthropy is a business of passion. This means it's not rational. It doesn't work like retail or banking or finance or publishing or other, more commercial, industries.* Experiments in mobile money allow us to compare money and giving to money and shopping.

The more philanthropy moves online, where every transaction leaves an interesting data trail, the more opportunities we have to learn a lot more about the real behaviors, motivators, information uses, and decision-triggers that lead up to philanthropic gifts. Neurofinance is getting its moment in the sun - perhaps neurophilanthropy is next?

*Note: don't interpret this to mean that I think finance is rational. Or politics. All markets may be completely irrational. In which case there is even more reason to learn about the role of passion, interests, and irrationalities in our giving - to inform our other financial practices!

Money is truly currency. And, like the mighty streams on the planet, when it gets stuck (damned up in someone's bank account) or floods (like the levees that were overtaken during Katrina), there's huge social (and environmental) pain. Philanthropies, like good acupuncturists, need to know what point to stimulate and how to finness the chi (aka money) back to a more harmonious relationship so it can, once again, maintain it's flow. Check out hollybeggar.blogspot.com for more thoughts.