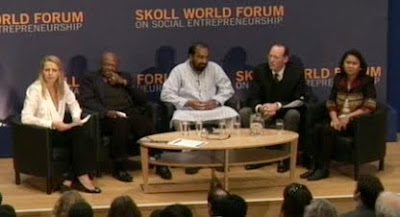 On Friday I'm participating in a session at the Skoll World Forum called "Crowds, Clouds and Social Change." I'm honored to be joined by Patrick Meier of Ushahidi, Chris Gebhardt of TakePart and Kevin Starr of the Mulago Foundation. It's like a "Best Of..." from Pop!Tech

Having had the incredible honor of listening to Archbishop Desmond Tutu, Peter Gabriel, Rebecca Onie, Ned Breslin, Baaba Maal and many others today, I'm going to frame the session around Aggregating, Amplifying, and Accelerating Change.

Ned Breslin, in describing his work with Water For People told us of tonight about listening to the "roar of the crowd" in a Rwandan village when the commitment was made to bring water to everyone. Archbishop Tutu claims to receive accolades only because he "is carried on the shoulders of the crowd."

Roaring crowds. That's what always on, affordable mobile technology allows us to do - on a global scale. Hear the voices of the voters, the protestors, the earthquake victims, the mothers of sick children, the health promoters, the witnesses.

We can hear what people say, aggregate it to a message, and act with the people whose lives are at stake. The tools can make everyone an activist. The tools can amplify the voices of the unheard, help us find our allies, and deliver a message.

Listening to the roar of the crowd requires us to change how we act. Social entrepreneurs need to listen to what they hear if they ask for it. The only thing worse than never listening is giving a voter, an activist, a dad, a schoolkid, a consumer, a mom a chance to voice their opinion and then ignoring it. New forms of organizations - large scale volunteer networks, mobile monitors of water wells, and "tech swarms" are all made possible by these technologies. For the most part, the actions required by each participant are still small - one text message, one phone call, one uploaded video. It is the aggregate impact that accelerates each small step - that "loosely couples many small pieces" into a global network of change.

They require us to listen differently and organize differently. This is not always easy. It might bring new results. The people to be heard are likely to be the very source of the social change that social entrepreneurs are trying to make happen. Aggregating, amplifying and accelerating their efforts is the next step in large scale change.