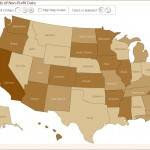 (Sorry folks - The first version of this post (January 25) somehow got corrupted/encoded. Lots of email readers received empty emails and/or gibberish. Hope this one posts better. Thanks for your patience.)

I've written about the Nonprofit Mapping effort before and am thrilled to say they've launched their test version. Go to the site, check out the data, check out the rankings, comment on the methods, improve the data, use the data, and consider the implications. For all of us as donors to nonprofits. For all of us as taxpayers who pay for the data. For people who use, enjoy, benefit from the work that nonprofits do. For regulators and watchdog organizations. For those of us who run nonprofits. For public agencies that partner with them. For social businesses trying to get into these spaces.

Now, let me tell you a story. Last year, two large foundations and a municipal government got together to discuss the challenges that their shared community would face if lots of nonprofits went out of business in the down economy. They hired a consulting firm. They commissioned a study. They involved the community in the study (kudos!) They shared the study (Yay!) They acted on the study (what?) No really, they put money aside to help the nonprofits address the challenges that were identified. (Really.) And they are continuing to do so. This is a good news story. It is - in my opinion - a good example of institutions, public and philanthropic, working with the community to help improve it. In tough times.

Let me tell you another story. Last year several donors and activists were discussing news reports about the effects of the economy on nonprofits. They wondered if the news was as bad as it sounded, with lots of organizations going out business, people losing services, jobs being lost. They wondered what they, as donors and activists, could do about this. So they tried to get some data on nonprofits in their community. And what they got was out of date. They asked around. They called. They searched online. They came up mostly empty. They took matters into their own hands. They built a website and a network of volunteers who could were good at online research. They divided up tasks. They developed transparency metrics about data. They talked on Skype, coordinated via online documents and email, texted, revised, iterated. They looked for free tools where ever they could - free hosting, free document services, free data visualization tools. They benefited from flex time policies provided by some of their employers. They found comparable sites on other issues, followed the trends in Open Data and Government 2.o. They went to CityCamp. And they built this beta site of the Nonprofit Data Scorecard to show what data are available on nonprofits, engage others in improving the data sources, and encourage state governments to collect, share and open up these data in ways that were useful.

The second story is also a good one. It shows several new ways of getting things done, highlights the power of free, and demonstrates how some technology approaches totally shift the sense of scale - what started as a local question resulted in a nationally-focused, regionally specific tool. And the whole process was public and open, while being led by a small committed group.

Both approaches matter. Both accomplished good things. But one assumed data were the beginning, not the end. And one relied on the same public it was designed to serve to build it.

I hope the protagonists of both stories will focus on how they can help each other, each playing to their strengths and learning from each other going forward. The ways in which the Nonprofit Mapping effort came to be - its tools, techniques, focus, and execution - are useful for all of us to consider. This is not the way change used to come about. And the changes it may unleash are also new.

What do you think of Nonprofit Mapping's work? Their goals, approach, and findings so far? Please let them know - they're on Twitter and Facebook and have a blog open for comments. Let me know also, please.