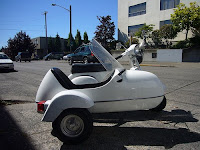 Buzzword 2009.2 Sidecar Funds
The Gates Foundation got a fair bit of attention last week for the $10million in unsolicited funds that it raised in 2008. This is not just news for the Gates Foundation but for all of philanthropy - private foundations are going into the business of managing "sidecar funds." In the angel investing or venture capital worlds sidecar funds are those that "ride along side" major investments. The idea is to leverage (another buzzword) the due diligence, investment and monitoring that has gone into a primary investment.

In the philanthropy world, the 2006 Buffett gift to Gates is the biggest example of this - one donor riding alongside the infrastructure and due diligence of another. The many smaller gifts that make up that $10 million given to Gates represent the appeal of this approach - ride along on the investments Gates made in staff, research, strategy, process, monitoring, and learning. And not just ride, but free ride - giving gifts to Gates comes at no cost - there are no management fees, percentages taken on assets under management, or service charges levied to these donors by Gates.

Gates is not the only large foundation that serves individual outside donors. The Ford Foundation features information for donors off of its website. Several small foundations partner with others - meaning take grants from the others - to regrant in their region or issue-area of specialty.

This makes the sidecar fund phenomenon relevant to philanthropy writ large. After all, if the roles that foundation staff play in the philanthropic revenue system are those of analysts and strategists, and the CFOs of these organizations are already being paid to invest the endowment, then riding alongside these systems is the cheapest, highest quality service donors are going to be able to get - more research than from a national donor advised fund, more specialized expertise than a community foundation, and cheaper "fees" than either. It is certainly cheaper than starting your own foundation.* For donors these options might be very enticing - high quality expertise on both the investment and grantmaking side at lower cost than other vendors in the market. For the foundations, this offers one way to "leverage other people's money" directly - manage it and give it away.

There is a lot of justified concern among nonprofits about leadership, including the need to fill more than 20,000 job in the sector in 2009. This leads to discussions of leadership development and the "pipeline" of leaders. Who is coming up next? How will they prepare for management roles, how will the sector replace those who are retiring, how will we find the leaders we need? Sometimes hidden, sometimes overtly the discussion of leadership and "pipeline" is also a discussion of diversity and demographic change. In the just announced Community Leadership Project in the San Francisco Bay Area a notable amount of attention is being paid to developing leaders. About a month ago, New Profit Inc held a one-day training session for potential social enterprise leaders of color.

As for funding pipelines, well, anyone who has tried to raise money for anything lately knows about these.

*There are tax issues to be aware of if making a donation to a private foundation. Talk to an attorney.

I am not necessarily promoting these practices or organizations just pointing out the trends and buzzwords.

Thanks for writing in. Community foundations have long been a partner of choice for community-oriented giving. But they are not the only choice - as shown by partnerships between large national funders who chose to work with local private foundations dedicated to their same issue areas.

The importance of the trend (the buzzword is just that, a buzzword) is that community foundations and all other public grant making charities have YET ANOTHER competitor in their marketplace of services and expertise.

I'm not sure what your caution about being careful with buzzwords means? The caveat at the end of the post states specifically that I'm neither promoting nor discrediting any of the strategies or issues or opportunities represented by the trends that are captured by the buzzwords. I'm just pointing them out.

My work with community foundations is best represented here http://www.communityphilanthropy.org or at http://www.blueprintrd.com.

Lucy - you're right on with these buzzwords! And, as a former community foundation staffer, I think you're right that private foundations are offering great new opportunities for donors. It likely depends on the geographic scale and issue intensity a donor wants to work at.

Hmmm. Maybe to maximize charitable impact the donor should set up a donor-advised fund but give the private foundation advisory authority.