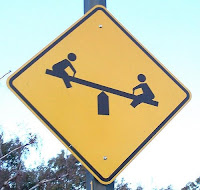 I am remiss as I have just realized that I have not previously tagged leverage as a buzzword. I guess it goes to show that some buzzwords become so embedded that we almost miss them.

We've heard a lot of bad things about leverage lately - sub prime mortgages, bank bailouts, credit default swaps, etc. all have some connection to the idea that you can use a little money to access a lot of money. And much of the economic pain we face now seems to be because too many institutions were over- leveraged.

But in philanthropy the idea of leverage is usually less about debt* and more about using dollars from Pot A to access dollars from Pot B. If a donor puts in $1 and, in so doing, attracts another $1 to the issue or organization, that is a good thing. Leverage is at the root of matching grants, NPR pledge drives, giving circles, pooled grant making funds, social venture philanthropy, affinity groups, and lots of other things that are now normative on the philanthropy landscape. (Did I just write that? Oy. Let me try this instead - "Leverage is a common concept for both donors and foundations.")

If it is so common, why is it a buzzword? Partly because there is a good amount of discussion and innovation about how leverage is achieved. We increasingly hear foundations talking about the need to "leverage other funders" (both private and public) as part of their strategy development - especially now where stimulus funds are concerned. A lot of the discussion about "exit strategies" or "sustainability" is about leveraging other revenue sources beyond a foundation's initial support. Buzzword #2009.2 - sidecar funds - are all about leveraging someone else's infrastructure investment and their knowledge.

It also achieves buzzword status at this point in time because the public sector - in discussions of everything from stimulus funding to health care, to the Office of Social Innovation and State Department's public/private initiative - is talking leverage, leverage, leverage.

At their root, these developments represent a realization by foundations and donors that they cannot achieve their (often hyperbolic) mission statements by themselves, that they operate within funding streams that may or may not work well but are out there, and that the more each of us understands where we fit in these revenue systems the better chance we have of making them more effective and efficient. The rise of leverage as buzzword may also be a sign that systems thinking is really beginning to take hold in philanthropy. Or it may just be a buzzword.

*For discussions of debt and the nonprofit capital markets, and the ways that leverage works in that realm, I defer to the experts at the Nonprofit Finance Fund. To paraphrase Click and Clack, don't mistake the trends discussed on this blog as consulting, financial or legal advice.

The fact that workplace giving is the only type of non-profit fundraising that is subsidized, high leverage, low risk is often not recognized.

Example of leverage within the Combined Federal Campaign (CFC), CFCs are organized regionally, with more than 250 nationwide. For a small, national non-profit with one application, they are automatically in all 250 CFCs with their 25 word description of the non-profit delivered to every Federal public servant in the US government. How much would it cost your non-profit to mail a postcard with a 25 word solicitation?

Just one example of the leverage.

Here's another question, showing why business financial terms don't always make sense in the non-profit world. What's your ROI, if you don't provide the Investment? Workplace giving is also "No money down" fundraising.

If you would like my 2010 CFC Special report, please go to
cfcfundraising dot com and request it. Thanks!