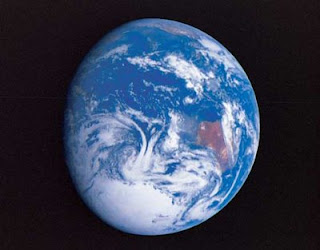 I don't think I have much that is original to add to all the conversation that will rage around today in celebration of Earth Day, but I certainly want to mark the occasion. I do think this piece by Elizabeth Kolbert in the April 27, 2009 issue of The New Yorker is worth a read. One comment I love in her piece:

“That was the remarkable thing about Earth Day,” [Senator Gaylord] Nelson later said. “It organized itself.”

The first Earth Day was April 22, 1970, and as Kolbert notes in her article, was marked by everything from dead fish being dragged through the streets of Manhattan to hand-dumped "oil spills" on the streets of Washington. An estimated 20 million people participated that April day. All that without cell phones, texting, Twitter, Facebook, GPS, or the Internet. Within a few months, President Nixon would create the EPA and NOAA. By the end of 1974 the Clean Air Act, The Clean Water Act, the Pesticide Control Act, the Endangered Species Act, and the Safe Drinking Water Act would all be law.

If, as Vice President Al Gore remarked to the audience at The Goldman Environmental Prize ceremony on Monday, "This year is Gettysburg for the environment," then we had all better get busy. Small and big actions will matter. GlobalGiving will match donations to green projects by 50% through April 28. TakePart lists 10 "don't miss" Earth Day actions you can take. SocialActions has lots of things to do. Reform Jews are leading a door-to-door (L'Dor va Dor - its a Hebrew joke) earth day campaign. Amy Sample Ward has good ideas and resources on her blog. The EarthDay Network will help you find things to do - including calling your Congressional Rep to voice support for the Markey Waxman Climate Bill, while others want you to push for stronger legislation.

Go ahead, do something good for the earth today. And tomorrow also. And right up to (and beyond) The Copenhagen Climate Conference. If 20 million people could participate in 1970, brought together by "good old fashioned community organizing" and major legislation and new government agencies could result, imagine what we should be able to do with tech-enabled community organizing, a global commitment, and a new U.S. Administration.

Meanwhile, back at institutional philanthropy (a.k.a. foundations) hundreds of millions of dollars are being spent to combat climate change...here and around the world. No pun intended, but this is arguably the hottest area in philanthropy today, attracting the attention of the big brand name foundations as well as many new donors. Want to see how this money is being spent? http://www.foundationcenter.org/focus/gpf/climatechange/

Brad (full disclosure, I am President of the Foundation Center)

Thanks Brad - and others, this is one example of why I love my blog - put out a thought and great information comes flooding in.

(but I'm not sure we should forgive Brad his terrible pun....:))

The GPF/Foundation Center info partnership is a great example of two great knowledge sources, one focused on relationships (GPF) and one on data (FC) complementing and extending each other.