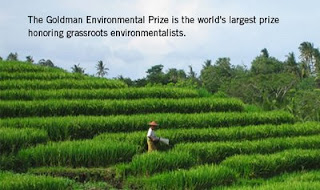 Last night, on a stage in San Francisco, before a packed house, S. Hugo Jabini, a lawyer and Saramaka Maroon from Suriname, told the assembled about the three most important technologies for protecting the rain forest, his community, and the rights of indigenous people around the globe. What tools did he mention? Not Google, which has partnered with The Goldman Foundation to create a truly cool virtual tour using Google Earth. Certainly not Twitter, Facebook, or YouTube. Not the Internet, which powers Global Greengrants, a wonderful new partner to Goldman that now enables you and me to add our own financial contributions to these world-changers.

No, the tools Jabini referenced were GPS, aerial photography, and oral history. Jabini's words remind us, more succinctly than I ever could, that technology needs people. Global change is local. The future depends on the past. Memories matter as much as mapping. His work to protect the forest rights of his own community, spread across tens of thousands of square kilometers of rain forest in 100+ small villages, has resulted in international legal protection for indigenous people throughout South America. What he and his colleagues started to do was save their own way of life. This is true of his co-winners from Gabon and Appalachia. What resulted is systemic shifts in power that saved the lives of people throughout their lands.

The winners from Bangladesh, Bali, and Russia took different approaches - using the law to protect land and labor, co-designing with the urban poor water, waste and compost systems that work for them and all of us on the planet, and building global networks of activists to reduce toxin use and pollution. All seven winners focused on what they knew, where they lived, and what was possible - even if they faced formidable, even life threatening, odds and opponents. As they have for 20 years, the Goldman Prizes emphasize the ability of "ordinary people to do extraordinary things."

The challenge of trying to capture the power, feeling, and potential of the Goldman Environmental Prize ceremony is there is too much from which to choose.The stories and words of each of the seven 2009 recipients, who join 133 predecessors from the last 19 years, can and should be heard. Because the folks behind the prize know that media outreach and education about these award recipients is critically important to leveraging the prizes themselves, you can hear them in their own voices, even if you couldn't get a seat at the Opera House. Videos, biographies, links to their work, interviews - it is all here.

The event works. It inspires. It provokes. Adults and kids alike leave feeling awed. My son and my colleague's son listened rapt for two hours and then the questions gushered out for the next two hours. What did she mean, "every time you flip the switch your contribute to the destruction of the land, air and water where I live"? Why did the medicine from his mom work when the doctors couldn't fix his knee? What does a "choice between exploitation and unemployment" mean? How come the people in Bali don't have clean water? How is it possible that pollution in one place can be so dangerous to people in other places? Why was he sent to jail?

These are tough questions. All the celebrity that could be mustered - Vice President Al Gore, Robert Redford, Tracy Chapman*, Christiane Amanpour - can not answer these questions. But the prize winners can. Not with words but with their lives' work. They are not only answering hard questions, they are asking harder ones and re-shaping the entire discussion. About what matters, what global means, and, yes, what technology is needed.

*Tracy Chapman played "Talkin bout a revolution" and then, in what she called "an upbeat environmental song," she covered Joni Mitchell's "Big Yellow Taxi." As Chapman herself noted, there is an opportunity for the writing of upbeat environmental songs. As my seatmate noted, only Chapman would label Mitchell's anthem to 'paving paradise' "upbeat."**

The Goldman Fund, through the Jewish Funders Network, is also offering $750,000 in matching funds to funders making first major gifts to Israeli environmental organizations. (www.jfunders.org/environment). More great ways the foundation is leveraging its philanthropy to increase support for this critical sector.

Thanks for letting me know! That is fabulous - looks like Goldman "gets it" when it comes to leverage:

The Goldman Fund 'gets it' alright. And the Global Greengrants Fund intends to help Goldman leverage the deep insight and local knowledge of their network of 133 Goldman Prize Winners from the last 20 years into a powerful force for distributing more small grants to help incubate the future winners of the Goldman Prize. The Goldman Prize awards ceremony was repeated tonight - April 22nd - at the Smithsonian Museum of Natural History in Washington, DC where I was welcomed at the door by Ethel Kennedy and Steve Mills, the International Director of the Sierra Club - to an event that impressed the East Coast supporters of the global grassroots environmental movement even as the Global Philanthropy Forum was going on at the nearby Mayflower Hotel in an unintentional schedule conflict that featured Paul Brest of the Hewlett Foundation and Aquasi Aidoo of Trust Africa.

Chet
Thanks for this info - this is exactly right about "getting it" - Goldman and Global GreenGrants are great examples of two different platforms coming together to extend each other's reach. My reply to Brad's comment on the Earth Day post here at philanthropy2173 shows yet another example - the GPF/Foundation Center relationship. These "extender" partnerships are very important - and will be subject of another blog post....

Great to know about the DC event - glad Goldman is going bi-coastal along with Global...!

We were not the only one's to comment on Chapman's idea of "Upbeat" - Here's a next day follow up, plling from Leah Garchik's column in the SF Chronicle...

First - my comment on the blog: "Tracy Chapman played "Talkin bout a revolution" and then, in what she called "an upbeat environmental song," she covered Joni Mitchell's "Big Yellow Taxi." As Chapman herself noted, there is an opportunity for the writing of upbeat environmental songs. As my seatmate noted, only Chapman would label Mitchell's anthem to 'paving paradise' "upbeat.""

Garchik points out "Tracy Chapman, who performed at the Goldman Environmental Prize ceremony Monday, said it had been hard to comply with a request that she sing an upbeat song about the environment. She did some research, she said, and "I have to say there's an opportunity out there. Because there aren't that many." Her choice: Joni Mitchell's "Big Yellow Taxi," the chorus of which says, "They paved paradise and put up a parking lot." Not all that upbeat, but at least it's nuclear sludge free."