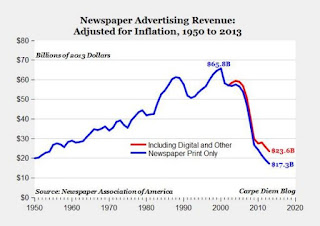 The news business has been through quite a bit over the last two decades. A year or so ago, Facebook made itself into a key distribution channel for magazine, newspaper and broadcast outlets - creating tools like Instant Articles, inking deals to with news organizations to use Facebook Live, jiggering  its news feed and striking deals with major outlets. Nowadays, news organizations pretty much depend on Facebook to get their stories in front of readers.


So it's a big deal when Facebook then turns around and says, never mind, we're changing our algorithms (again) so Facebook users see less of news content and more of their friends' stuff.

By now, we should all realize - it's their platform, their algorithm, their rules. News organizations know this, but Facebook's reach is so great they clearly decided they needed to play in the company's sandbox, regardless of the rules.

Just as it promised the news companies, Facebook's pitch to nonprofits is about scale. Facebook may have 1+ billion users, but that doesn't mean they're all going to suddenly care about your organization.

Shifting your fundraising over to the platform may get you a few dollars in the short term. It may make it easier for an especially eager volunteer to run a fundraising event for you.

But be wary. If someone came to you and offered: "Why not hold all your events in our house, we'll manage all your invitations, process all the gifts, follow up with everyone who attends" you'd ask yourself, "What's in it for them?" Ask yourself the same question of Facebook (or any tech platform that you don't control). The answer is easy - they get all of the data on who, what, when, and how much. They own your fundraising data. And if they decide to change the rules on how their tools work (or close the doors of the metaphorical house) they can. If history is any guide, they will.

Nonprofits give up a bit of their independence, a bit of their donors' and constituents' privacy, and a lot of control with these arrangements. It may raise a little money in the short term. But in the long term it sells out the sector. Just ask your local newspaper publisher. If you still have one.

You point to perhaps the most important issue facing nonprofits in the moment. I know that sounds overly dramatic but I spent the morning thinking about your article and I keep circling back to the conclusion that such a statement could be true.

The most profound impact of Facebook nonprofit fundraising changes will be for mid-sized and small nonprofits. The largest nonprofits will continue to buy sophisticated digital and media strategies and gather the accompanying fundraising and marketing benefits. But like in the larger economy this group with massive budgets is more akin to the 1% in terms of privilege and resources in relation to most nonprofits. It’s the rest of the nonprofits that may be at risk.

There are thousands of middle size and small groups that do the work in our cities and towns that really make our communities places we want to call home. I liken the presence and impact of their work to a kind of community glue. Work with seniors, those with mental health or substance issues, with new immigrants or homeless, is often not very sexy or trendy. The impact or relevance of work is hard to successfully Tweet about. But can you imagine what your community would be like without them?

These groups are often hard pressed to make their annual budgets. They often come under fire for “overhead” and as a result few have any resources to engage in planning or more sophisticated analysis of their supporters. As a result, Facebook offers of “helping” to fundraise will be very, very seductive. I could easily see a significant percentage quickly moving to the platform and investing time and scarce resources.

Remember Bingo? In some states a few years back a small number of nonprofits made a lot of money hosting Bingo events. Seeing dollar signs, more and more nonprofits jumped in. Soon there were too many. With an exhausted marketplace nonprofits found themselves saddled with mounting financial losses, and in some cases, significant new debt. All these results were from something that looked like a sure thing at the beginning. I know Facebook’s offer(s) will be more sophisticated, bigger, more coordinated, and more solid. But what can most nonprofits realistically expect? And what will be the impact on the sector?

I am struck by your reference to the field of news and the impact of Facebook. A newspaper article used to be like discovering fundraising gold for nonprofits. But headlines – and even numbers of readers – seem few and far between for nonprofits in the new world of media. Perhaps I should add an exception for the viral stories about nonprofit blunders that seem to spiral out of control doing more harm than good to the sector.

The largest nonprofits don’t need Facebook. They will certainly take advantage of the platform because they have the resources to do so. The groups that perhaps do need Facebook also have the most to lose.

Hi Lucy, Nice article but does Facebook helps Non Profits in any manner.