Podcasts are in again. I know you know that. 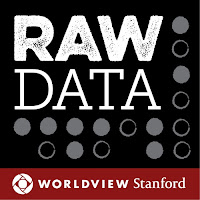 I was recently asked by the amazing folks at Worldview Stanford, who have included me in some of their regular campus programming, to do an interview for their new podcast. So first I wanted to listen to what they were up to. I missed my bus stop I was so tuned in.

In partnership with the Cyber Initiative at Stanford the Worldview folks have put together a great series (Raw Data) on how digital data are reshaping our lives. The Uploaded episode does a better job of explaining the power of metadata than any news story I've read. I wish I'd heard the episode on "crowd work" before sending Blueprint 2016 to press. The story on bitcoin made the slightly-less-near term changes that digital data and infrastructure may have on global finance accessible, compelling, and real.

I listened to the episode on digital data and voting the day after the Iowa caucuses. I should mention I also binge watched Scandal, seasons 1- whatever. Let me put it this way - Shonda Rhimes' plotline on rigged elections was pretty darn scary in its plausibility, and its got nothing on what Mike Osborne and Leslie Chang (hosts of Raw Data) interrogate in their episode, "Life, Liberty and the Pursuit of Data."

Each episode weaves a story from research. This is not simply a good Malcolm Gladwell article told on the air. The hosts interview scholars from multiple disciplines, visit companies, and speak with policymakers in such a way that you don't realize you've just had your mind blown by researchers in economics, law, engineering and psychology - you're just listening to a really good story. And learning a lot.

What other podcasts are you listening to?
Posted by Lucy Bernholz