Seventy-one. Born in 2007. Featured on Marketplace for three years and now "revealed" each December in the Chronicle of Philanthropy.

The Philanthropy Buzzwords lists that I've been keeping (with help from many of you) for all these years was the subject of a discussion at the David and Lucile Packard Foundation on Monday. My colleagues there had the chance to vote on buzzwords from past years and suggest their own for 2014 and 2015. One observant program leader noticed that my buzzword list is heavy on nouns - there are almost no verbs. I'd never noticed this. We've (jokingly) decided to cluster future buzzwords by grammatical category.

We had a good discussion of which of these terms are meaningful and which are pure jargon. We also talked about buzzwords that are so embedded in our work - engage and collaborate come to mind - that they don't make the annual list, they're become perennials.

Here's the full list and the raw voting data.

My incredible colleague Katherine Murtha, made quick work of sorting and cutting through the raw data for some insights. Here's what she found:

·       The five top vote-getting buzzwords were viewed (by most) as meaningful:
o   Privacy, Infographics, Bitcoin, Evidence-Based, and Storytelling

The Foundation staff also suggested buzzwords - which you are always invited to do by leaving them in the comments here or tweeting them to me @p2173. Those that make the list are given due credit and are awarded the title of Buzzword Ambassador - you'll be in good company: 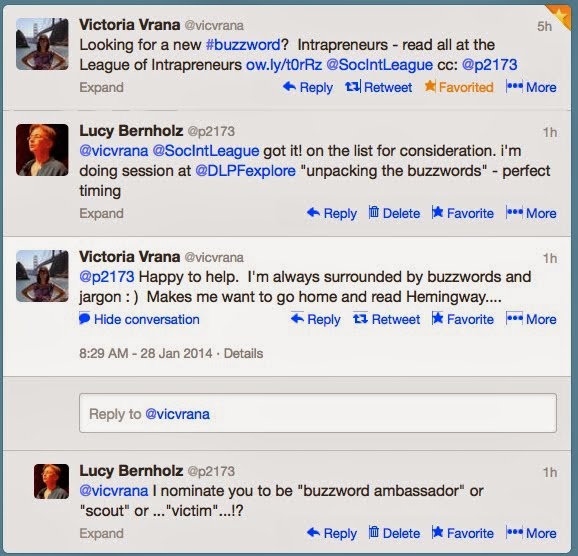 The Foundation staff also made predictions about philanthropy and their areas of program work - those will be revealed internally in January 2015.  Buzzwords and predictions are fun ways to focus on what we do and don't know. We used them as entry points into a discussion of where and how we get the information we use in our work, how we can diversify and check those sources for bias, and what makes a good buzzword or prediction. I encourage you to chime in!
*25 words were strictly seen as meaningful
8 votes: infographics ,7 votes: scale, 6 votes: metadata, 5 votes: data and crowdfunding, 4 votes: commons, charitable tax reform, and networked; 3 votes: NextGen and aligned investing; 2 votes: -giving pledge, pipeline, impact investing, mobile giving, and social capital; 1 vote: "move the needle," charity challenge, maps, taxonomy, B Corporations, design, micro- (endowment, philanthropy, finance, franchise, consignment), charitable gift cards, microfranchising, and open philanthropy

You missed one of my favorites:
space, as in "the philanthropy space"