The Digital Public Library of America

Sometimes, in all our fixation with technologies, we forget that there are people making these things happen. The tragic events in Boston on Monday, continuing through the lockdown on the city and its suburbs this morning, provided me with an all-too stark reminder of the humanity that underlies the most beautiful technologies.

I, like hundreds of others, was scheduled to attend the launch party for the Digital Public Library of America on Thursday, April 18. The events was to be held at the Boston Public Library, which has been, since Monday, closed to as part of the crime scene associated with the marathon bombings. 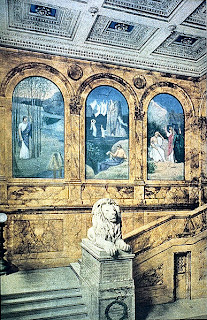 It was an idea filled with delicious irony - coming together to celebrate the intangible. Gathering in the gorgeous original McKim building or the newer Philip Johnson addition of the BPL one feels the attendant weight of history. These buildings are monuments to what we treasure - libraries as sanctuaries, preserving the past while people gather in the hushed present. But the DPLA is different - it is today's forward looking effort to connect collections across the country with the purpose of preparing for a future of digital everything. It is an untouchable virtual repository of metadata (and therefore, doesn't have any lion guardians of its own). But it is also, and as importantly, the result of the creativity, commitment, and hard work of hundreds of people from all across the country and their peers around the world.

I've been mostly an eager observer of the effort since reading Robert Darnton's 2010 call in The New York Review of Books. I remember reading that article and tweeting off one small idea on "orphan works." 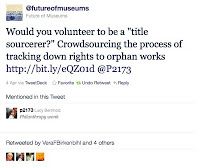 Soon afterwards someone followed up on my post and pointed me to listservs and wikis I could use. I sent off a "cold email" to Professor Darnton who was kind enough to respond and connect me to the staff at the Berkman Center working on the nascent DPLA. There, several people patiently pointed out to me the (numerous) shortcomings of my idea, linked me to resources where others had been working on this issue for some time, and encouraged me to learn more. With nothing to offer but enthusiasm,  I was welcomed to participate.  In 2012 I attended a DPLA gathering at the Internet Archive in San Francisco, where I could barely understand the jargon of the librarians and information scientists but left with a big smile on my face. The organizers had started with a panel about "stakeholders" - which included a museum curator, bookstore owner, publisher, activist archivist, and an author. I knew, right then, this was an idea for me.

The week's events in Boston forced the postponing of the gathering, though the founders still launched the beta version of the DP.LA website as planned at noon on Thursday. The community of people who made it happen have continued their work, while also reaching out to comfort each other in tragic times. From 3000 miles away I benefit from their work while also missing them, these people I have not yet met, who made this great resource possible.