Why does corporate philanthropy usually get slotted into the marketing budget/ vision of the company? In this age of conversation and co-production, community engagement/community affairs/community philanthropy seems to me to be a ripe R & D activity. Get out into communities or issues, see what they need, see if you can be useful. It's like social media - a conversation, not a broadcast.


A word from me, my sponsor: Thanks for reading this blog. Thanks for buying the Blueprint - consider it a "Thank you" for a $10 purchase in support of the blog. (It's pledge time in NPR land, why not here?) You can also get the "blog in a box," "a ready to go retreat" and everything you need to talk about the future of the social economy in this toolkit (from me and the Council of Michigan Foundations).


(Regularly scheduled programming)
I listened, attentively, to the story "autopsy" on This American Life. I think they set a new (high) standard for handling the mistakes we all make and are increasingly making in public. After watching, listening and talking about the Invisible Children video and how it compared to the Komen events of a few weeks ago, I realized two things:
I had a great time in Dallas with the local chapter of Social Venture Partners and the Dallas Foundation. Conversations in the hallways made me realize how much I've been thinking about - and learning from others - about this question of 21st century institutions. I'm reminded of a story that Neil Degrasse Tyson tells in one of his lectures. It starts with a picture taken of the Cydonia region of Mars (below). 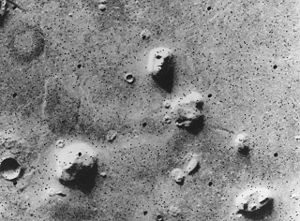 When this photo was first shown to us earthlings, according to Degrasse Tyson, many people took it as proof of life on the red planet. Really, those are just rocks. The photos that scientists used to locate  water on Mars show a barren landscape (no "faces"). His point is this - if you go looking for life on a distant planet and think that it's going to look like you, you're not going to find it.

My point - if we go looking for the institutions of the 21st century, and think they're going to look like those from the past, we're not going to find them. So I've started thinking instead about the attributes that viable organizations will have, given our expectations and technologies. A starting list includes:
Finally, I've been thinking about how we all need to "Act like an Artist." Artists have been getting the work done - their art - in commercial, nonprofit, individual and networked ways since the dawn of time. We need to learn from them because their social economy is now all of ours.

Can't believe I'm the first to comment on this great post--four days later.

I have a lot to say about the idea of creating an open social economy that belongs to the masses, but instead of rambling, I think I'll just add my own story from one of my favorite artists, Bob Dylan.

He's been called a "chameleon," in that people have observed he has no real style of his own, but instead incorporates the styles of others into his work. He absorbs, and is a conduit, for the spirit of the times.

It's interesting that you conclude this post with a mention of art, as I think, going forward, we will all need to be open and adaptive to what society offers--we will also need to be chameleons in our own right.

But, what I think you are getting at in this post is related to the quality that has made Bob Dylan more than an artist, and more than a shifting figure who happens to produce good music. His songs speak for themselves, they are more than just a conglomeration of the styles that have come before.

In the opening scenes of "I'm Not There", a Dylan biopic where his multi-faceted personality is portrayed through several different actors assuming the role of Dylan, the opening scene discusses his changing nature, and concludes by saying:

"But a song is something
that walks by itself."

Institutions should be (and are) conversations, but the point is not the flow, the point is that the conversation is, and creates, something greater than the sum of the parts. The new social economy--as I see it--is not only about open data, social media, collaboration, etc, but about the human potential that is unlocked through those tools. Looking at it that way, you see that this "new" social economy isn't that new at all, it's just a more efficient way of unlocking potential.

So, that was a ramble. Sorry.