Haiti - one year on

Inside Disaster Trailer from PTV Productions on Vimeo.

One year ago today an earthquake devastated Port-Au-Prince and much of Haiti. Hundreds of thousands died, more were displaced. Lives, families, communities, infrastructure, businesses, schools, and government are still be rebuilt. What have we learned? 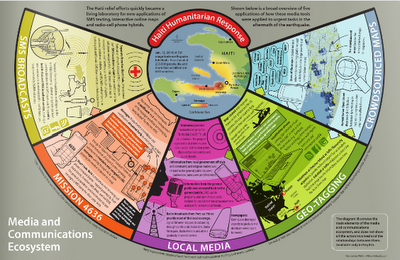 A new report from The Knight Foundation looked specifically at the roles of media and communications in responding to the disaster. The report is well worth a read. It notes that radio was - and is - the most important communications medium in terms of reach, cost, and accessibility to Haitians. New tools - including SMS short codes, crowdsourced mapping, and geo-tagging.

The report does a very helpful job of identifying what worked when new media startups and volunteer groups partnered with established disaster response organizations and government agencies. It makes recommendations for everyone - media, techies, donors, governments, and response organizations. You can get the full report here.

Two other interesting notes on looking back. First, I wrote about the Disaster Accountability Project - a watchdog for disaster efforts - back when I first learned of it. It's founder, Ben Smilowitz, has continued his 1 staff/100s of volunteer effort - you can find out more here.

Second, recent reports total the American philanthropic donations to Haiti at $1.4 billion. A big number sure, but less than that given for other disasters. (Here are some interesting breakdowns of who gave) You'll recall at the time the "big news" was all about text giving. Many people raised questions about how this new form of "rapid reaction giving" would play out in the long term. I posited then - and still believe today - the value of these tools is more about data and feedback loops and their utility in crowdsourced volunteer efforts than in actual fundraising. My one disappointment in the Knight report cited above is it doesn't look closely enough (for my interests) at the human side of the crowdsourced mapping, tool development, volunteer efforts that rose in awareness during the quake and are still going strong - such as CrisisCommons - one of the most interesting developments, I think, and one I'm still following closely.

Accountability is always important... being able to have a transparent look is key.