Thanks to Jeff Stern who posted this very informative comment on my post about the oft-asserted, but rarely citation-supported, claim that giving rose during the Great Depression:

"From what I could find with a quick online search, those who cited a source for this assertion are referring to a National Bureau of Economic Research working paper that shows charitable giving by religious organizations to have risen during the Great Depression (http://www.nd.edu/~dhungerm/Great_Depression.pdf).

I also found a more comprehensive report from the Sharpe Group in 1992 entitled "Philanthropy in Uncertain Times." It indicates overall giving dropped and then rose during the Great Depression, and it seems to be much more thoroughly researched. It relies on two main sources: the 1950 study by F. Emerson Andrews "Philanthropic Giving" and reports from pioneer fundraising consultant John Price Jones whose reports began in 1931.

The final conclusion is that "Overall, giving trended erratically upward during the Depression..." due to in large part to planned giving as "their deferred income rose at a faster rate than current giving declined."

This (pretty fascinating) second report is available online at http://www.sharpenet.com/resources/pdf/UncertainTimes2.pdf"

Now I haven't had time to read these reports myself. The data from Sharpe were shown in this graphic in the New York Times back in November, as was pointed out to me by my friend David Carrington, who also pointed me to this piece from the UK. 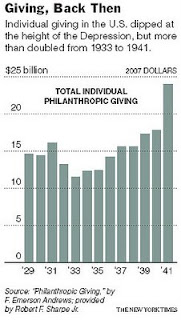 Robert Sharpe also followed up, and his comment can be found attached to this post, but I'll also paste it here:

"To add to Jeff's comment, when people were talking "depression" in 1991-92, I undertook to research giving during the Great Depression and subsequently published "Philanthropy in Uncertain Times" as a white paper for our clients.

We have recently published two updates to the 1992 report and they may be accessed at www.sharpenet.com. Click on home page "Giving During Depression" link.

According to a landmark work published by F. Emerson Andrews in 1950 that examined giving during the Depression, overall giving adjusted for inflation actually went up from 1929 to 1931 and then dropped about 24% over the next two years, bottoming out in 1933.

Giving then more than doubled between 1933 and 1941, reaching and surpassing pre-depression levels by 1937. The rate of growth for the 8 years between 1933and 1941 has seldom been equalled during any other 8 year period.

Evidence from contemporary reports in the New York Times based on annual surveys by the precursor of Giving USA is that between 1929 and 1933 major gifts by the wealthy dropped as much as 70%, roughly the same as the stock market decline during that period of time. Giving recovered with employment and the stock markets.

Observers at the time concluded that charitable giving and the demand for it were, in the vocabulary of economists, relatively inelastic. People consider their core giving to religion and other deeply held interests to be more like their utilities than a movie ticket and will cut other things before they reduce their giving. They do, however, tend to focus their giving in areas where the hearts and minds most tend to dwell and are less responsive to gimmicks, arm-twisting and other more aggressive types of fundraising that do not speak to their core beliefs and values.

Giving as a result does not go up in proportion to the level of boom or down in proportion to busts. There is a quote from a leading fundraiser of the time to that effect in one of the reports I reference above on our web site. "

I plan to read these reports, because the question interests me still. In particular, I am curious about Jeff's notes that it was religious giving that rose and that there was first a two-year "significant drop" and then a "slow but steady" rise over 7 years. The role of planned giving and unemployment are also interesting. The details within these broad trends might be useful to examine as we enter 2009. I have been re-reading some broader histories of the Great Depression (Kennedy, Shlaes, and like President-elect Obama, Alter. I'm skipping Kearns Goodwin for now.)* A big thanks to Jeff for pointing me to the research above, to Robert for conducting the research and for sharing it, and to David for pointing me to the additional resources. I welcome any other resources you may have or reading you might recommend.


* I am trained as an historian after all - forgive me if this isn't how you would choose to spend your month of mourning.

We don't even have to go as far back as the Great Depression to see that trend. In fact, since 1960, the only time that giving has gone down in North America was between 2000 and 2001 when the tech-bubble burst and 9/11 coincided. After that there was a spike.

Gena
I agree with you about the trending info. What interests me about the Great Depression in particular is its scope, which was unlike any of the recessions since the 1960s. I'm trying to better understand the giving patterns from that specific period - whether or not they align with more recent trends - from the perspective of whether or not those patterns will shed any insight on what we will experience in 2009-10-11.