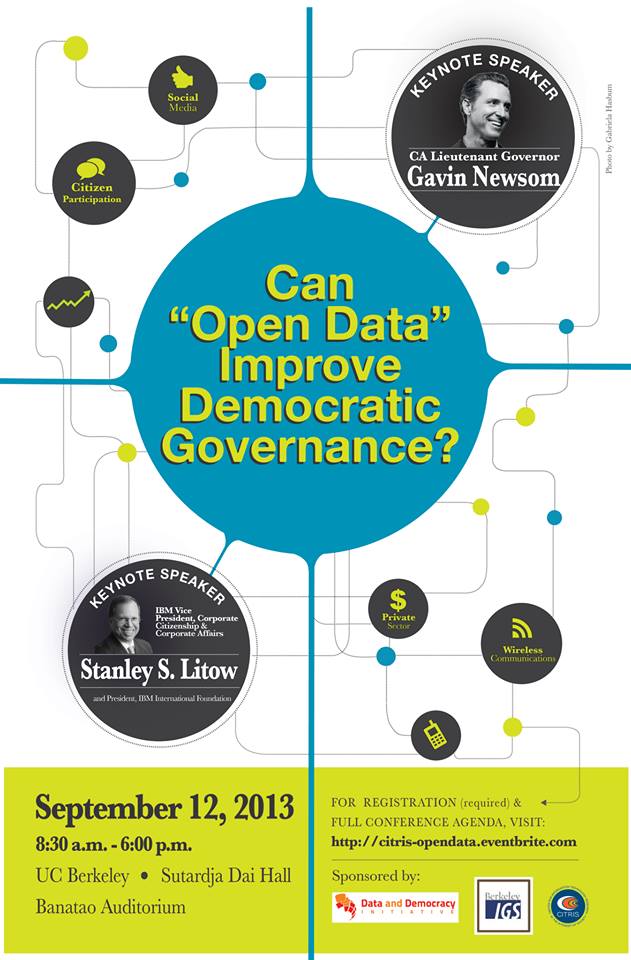 On September 12th the Data and Democracy Initiative and Institute of Government Studies will host a one day conference on the relationships between data and governance at the University of California at Berkeley. The full program is here. Registration information is here.


The conference features sessions on public/private sector relationships around data, making sense of all the data, data and civic engagement, and data and its discontents. Given how the pendulum of public discourse seems to have swung from "more data, more good" to "who's got my data?" informed discussions such as this one strike me as timely and important. Several of the participants in the event have informed my thinking at Stanford, including speakers from Sunlight Foundation, Maplight.org, and Steven Berlin Johnson. Michael Gurstein's work on community informatics was just recommended to me. I'm particularly interested in the session on the ethics of data, as this is an area I'm looking into more closely at the Digital Civil Society Lab and the next phase of the #ReCodingGood Project.

I'm excited about the burgeoning field of civic tech, especially as research is beginning to learn from, inform, and move forward with practice. I recently attended #FridayNightHack in which coders from various Jewish communities worked across national borders and time zones (San Francisco and Tel Aviv) to expand some of the open data efforts underway in Israel. There I met a guy named Marc Joffe, a former Moody's analyst, who has built a credit rating system for cities. His work is incredibly important - and amply demonstrates how much a smart, skilled analyst can do with the right data. Not only has Marc created a new way of thinking about credit and the financial health of cities, he's shared his work and his analysis openly. He was at the hackathon to contribute some of his skills, to see if his system would work with Israeli data and for Israel cities and investors, and to find partners who can help him continue his work. His is a great story of what individuals can do, and why we still need institutions - the tools that he's built need to be used, maintained, and expanded on beyond the capacity of a single person.

I was also pleased to find this recent case study by Susan Crawford on Boston Mayor's Office of New Urban Mechanics - providing insights about how that civic tech initiative works and bringing some academic expertise to the folks at City Hall.

We've been experimenting with data, digital tools, and governance for several years now. In my efforts to inform and learn about digital civil society, I'm drawing a great deal from these related efforts.